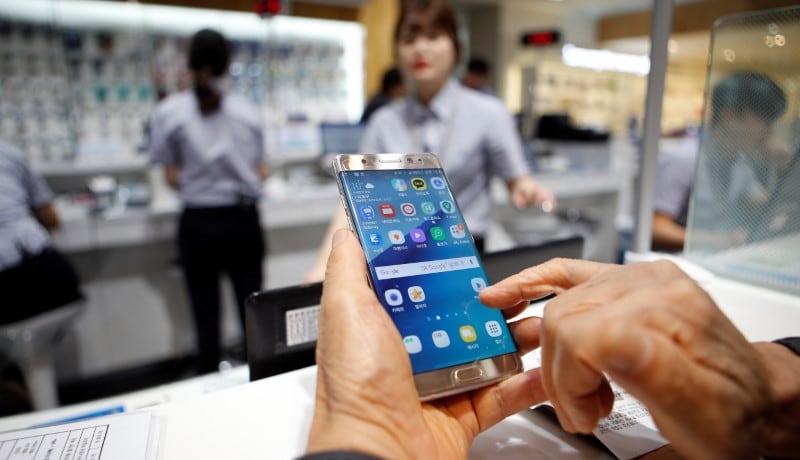 Samsung Electronics is offering an upgrade programme option to Galaxy Note 7 customers in South Korea who trade in their recalled device for a Galaxy S7 phone, marking its latest attempt to retain customers.

In a statement on Monday, Samsung said customers who trade in their Galaxy Note 7 phone for either a flat-screen or curved-screen version of the Galaxy S7 can trade up for a Galaxy S8 or Galaxy Note 8 smartphone launching next year through an upgrade programme.

(Also see: Samsung Galaxy S8 May Be Delayed Due to Galaxy Note 7 Investigation)

The world's top smartphone maker permanently ended Galaxy Note 7 sales due to continued reports of fire from the flagship device. In addition to offering refunds or exchanges for a Galaxy S7 smartphone, Samsung has already offered financial incentives amounting to KRW 100,000 ($88.39) to affected customers in South Korea.

Users in the upgrade programme will need to pay only half the price of a Galaxy S7 device, rather than the full amount, before exchanging to the Galaxy S8 or the Galaxy Note 8, Samsung said.

In offering the Galaxy Note 8 upgrade option, Samsung indirectly reinforced previous statements that the Note series will not be discontinued. The company said the availability of such a programme in other markets will be dependent on the situation in each country. It did not elaborate.

Samsung has stepped up marketing and promotion for its Galaxy S smartphones to try to make up for some of the lost sales. The Galaxy Note 7's collapse is already costing Samsung $5.4 billion in operating profit between the third quarter of this year and the first quarter of 2017.

Some analysts say Samsung will need to offer incentives to affected customers as part of their efforts to limit long-term damage to its brand and reputation from the Galaxy Note 7's failure.

The South Korean firm is facing legal challenges from customers, as well. Harvest Law, a domestic law firm, said on Monday one of its lawyers, Peter Young-yeel Ko, and 526 others have filed a lawsuit in a South Korean court against Samsung seeking compensation of KRW 500,000 ($442.61 or roughly Rs. 29,400) per person. Samsung did not immediately comment on the suit.

The firm is also facing a proposed class action lawsuit from three Galaxy Note 7 customers in the United States.