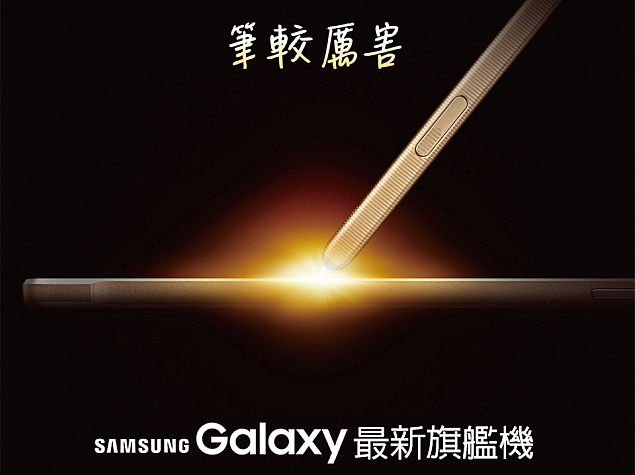 After Samsung Philippines' teased the launch of upcoming Galaxy Note 5 via a dedicated countdown page, it was the turn of a telecom operator to tease the same. Taiwan Mobile has teased the Samsung Galaxy Note 5 in an image also showing the S Pen stylus. Additionally, Samsung Netherlands has seemingly confirmed the Galaxy S6 Edge Plus name ahead of the launch.

The Taiwan-based operator shared an image purportedly showing the side profile of the Galaxy Note 5, which appears to be slimmer than the Galaxy Note 4. In the image, the S Pen is also seen to house a button, as in the previous versions of the stylus. While the image doesn't give away new details about the handset, it tips that Samsung has kept its Galaxy Note 5 sleek.

Another piece of news, this time from Samsung stables, is that the company has seemingly confirmed the Galaxy Note S6 Edge Plus naming ahead of August 13 launch.

The Samsung Netherlands website listed the handset's name in a contest as "Samsung S6 Edge Plus" for registrations. According to the promotional contest (via Phone Arena), the duration for registrations for the contest for interested consumers was from August 5 to August 11. Notably, Samsung Netherlands' dedicated page for the Galaxy Unpacked 2015 lists previous flagships, saying, "Evolution of the Galaxy" starting from Samsung Galaxy S1, launched in 2010, to the Samsung Galaxy S6, launched earlier this year. It appears as if the company is teasing the launch the Galaxy S6 Edge Plus, which is said to be the company's large-screen variant of the Galaxy S6 Edge.

In another leak, the Samsung Galaxy S6 Edge Plus was listed by Jarir Store in the Middle East with full specifications. According to the listed details, the handset will feature a 5.7-inch QHD (1440x2560 pixels) Super Amoled display; an octa-core Exynos 7420 processor coupled with 4GB of RAM; 32GB and 64GB of storage options; a 16-megapixel camera; a 5-megapixel front-facing camera; a 3000mAh battery, and Android 5.1.1 Lollipop. The listing purportedly tips that the handset measures 6.9mm thick and weighs 156 grams. Two colour options tipped include Black and Gold.

We may be less than a week away from Samsung's Galaxy Unpacked 2015 event on August 13, but there is no shortage of details chipping in. A latest leak coming from Taiwan (via GSMArena) tips that Samsung may launch the dual-SIM version of the Galaxy Note 5. The new detail also claims that the microSD card support will be present in dual-SIM support. Notably, a recent report suggested that Galaxy Note 5 may miss out on microSD card support.

The new report claims that Samsung will implement the new hybrid SIM tech that allows consumers to have either 2 SIMs or have 1 SIM and another microSD card to use.

We will have to wait till Samsung's Galaxy Unpacked 2015 event on August 13 to see what the South Korean giant has up its sleeves.

Google Maps for iOS Gets Night Mode, Place Labels, and More
WCD Ministry to Use IT Related Services in Its Schemes