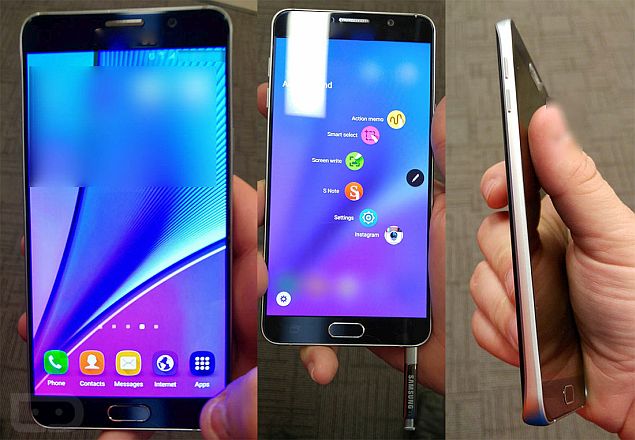 Samsung's Galaxy Unpacked 2015 event scheduled for August 13 might be just few days away but that hasn't stopped the leaks from dropping in. New leaked live images of the Galaxy Note 5 have been spotted. Additionally, purported innards of Galaxy Note 5 and Galaxy S6 Edge Plus, both the handsets are expected to launch next week, have been seen on AnTuTu.

Droid Life has received new live images of the Galaxy Note 5 purportedly showing the handset in its full glory. Similar to earlier leaks, the Galaxy Note 5 is seen featuring identical front panel to the Galaxy Note 4. The new phablet from Samsung is seen sporting side metal bezels and the anticipated S Pen is also visible in the leaked images. Some of the connectivity ports seen in the leaked live images are charging port (Micro-USB port), which previously was rumoured to support USB Type-C, single speaker on the bottom panel, and a headphone jack. Droid Life also claims some of the details of the Galaxy Note 5 like 4GB RAM, no SD card slot, three storage variants 32/64/128GB, and a 3000mAh non-removable battery.

According to the leaked AnTuTu details, the Galaxy Note 5 will allegedly feature a 5.7-inch QHD (1440x2560 pixels) display with a pixel density of 515ppi; an Exynos 7420 processor clocked at 2.1GHz; 4GB if LPDDR4 RAM; 32GB internal storage; a 16-megapixel rear camera; a 5-megapixel front-facing camera, and run Android 5.1.1 Lollipop.

The Galaxy S6 Edge Plus, on the other hand, is said to feature a 5.5-inch display with 2K resolution and a pixel density of 534ppi; an Exynos 7420 octa-core processor; 4GB of RAM; 32GB of inbuilt storage; 16-megapixel rear camera, and a 5-megapixel front camera.

The AnTuTu document also claims final benchmark scores of 69,702 and 68,345 for the Galaxy Note 5 and the Galaxy S6 Edge Plus respectively.