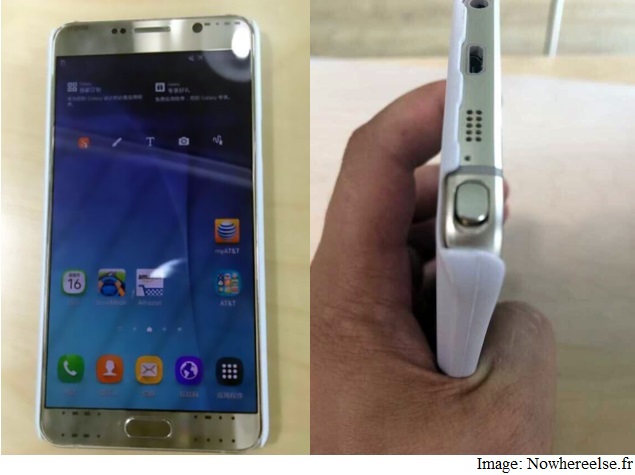 Samsung's upcoming Galaxy Note 5 prototype has been leaked in a bunch of images tipping the design of the phablet, while new details on the S Pen have also emerged on the Internet. Additionally, new details about the innards on the Samsung Galaxy S6 Edge Plus have also made it to the Web, apart from leaked images of the Galaxy S6 mini.

A Korean report contracting earlier leaks that suggested the Samsung Galaxy Note 5 would feature an eject-able S Pen, claims that the S Pen will have to be popped out from the body manually much like previous versions. A report by DDaily also claims that the Galaxy Note 5 would sport the same design elements as the Galaxy S6. The report is in line with an earlier report, and adds that the phablet would feature a sealed battery.

The Galaxy Note 5 has been also spotted in Geekbench benchmark listing tipping details about the Samsung SM-N920V, which was recently tipped to be a Verizon-bound variant. According to the benchmark listing (via GSMArena), the handset will feature 4GB of RAM and will be powered by an Exynos 7420.

In another leak, a Vietnamese report has come out with new details about Samsung's Galaxy S6 Edge Plus, also rumoured to launch alongside Galaxy Note 5 in mid-August. According to the new report, the handset will feature 4GB of RAM and will be powered by the Exynos 7420 processor, already seen on the Galaxy S6 and S6 Edge. The report also tips that the handset will be backed by a 3000mAh battery.

Some of the preliminary leaked specifications of the Samsung Galaxy Note 5 claim that it will sport a 5.7-inch to 5.89-inch display; 4GB of LPDDR4 RAM; measure just 7.9mm thick (compared to Galaxy Note 4's 8.5mm); Exynos 7422, and a 4100mAh battery. An earlier report even claimed that the Galaxy Note 5 would feature a USB 3.1 Type-C port.