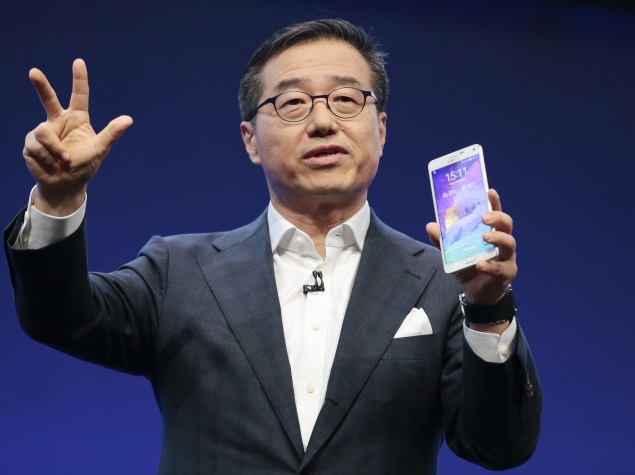 The new Galaxy Note 4 features a crisper, 5.7-inch display in a metal frame, reflecting Samsung's latest design strategy to keep pace with rivals including Apple Inc, which is expected to launch its first large-screen phones next week.

The new model offers accessories designed to attract gamers and an improved pen stylus and related software as a handwriting alternative to typing on a keyboard. It boasts easier to use multi-tasking features that take advantage of its large screen.

The Note 4 is key to a recovery by Samsung Electronics, which faced initial derision at the idea of callers holding elephantine screens up to their ears. Since the Note's introduction in 2011, it has made 5-inch and larger screen sizes the standard for high-end phones as usage shifted overwhelmingly to reading and writing texts and emails or documents, using apps, watching movies or playing games rather than calling.

Mobile phone analysts said that, while packed full of hundreds of features and many of the latest hardware specs, there is little in the Note 4 to excite new users.

"I think this is mostly an incremental change," Forrester analyst Thomas Husson said. "What is missing is a total experience on top of the device to really differentiate in the interchangeable Android device ecosystem," he said, referring to the closely coupled software and services Samsung needs to distinguish its devices from dozens of cheaper rivals.

Samsung Electronics' operating profit fell to a two-year low in the second quarter as it lost market share, despite still shipping nearly a third of all smartphones worldwide.

Research firm Canalys says Samsung lost its title as No. 1 smartphone player in China, the world's biggest market, to Xiaomi Inc during the April-June quarter. It continued to lose market share in other emerging markets, analysts say, undercut in part by rivals producing increasingly attractive products at much lower prices in the lower end of the market.

Part of the blame goes to the Galaxy S5, which is seen widely as a disappointment since its global launch in April. Research firm Counterpoint estimates the flagship premium phone was outsold by the much older Apple iPhone 5S in May, and analysts say it failed to deliver major improvements from its predecessor.

Needing a big hit
While the new Note device appears to meet expectations on key features such as the quad high-definition display and a 16-megapixel rear-facing camera, the improvements are incremental and suggest further struggles ahead for Samsung to differentiate its product, especially with large-screen iPhones on the way.

"It is an acknowledgement that Samsung took a wrong turn with the move into plastic cases and that its designs didn't move fast enough to keep pace with many competitors," said Ben Wood, a mobile industry analyst with UK-based CCS Insight.

"The importance of metal cases is that it directly translates into bigger, edge-to-edge screens," he said.

Samsung also showed off a limited-edition version of the Note with a curved edge screen on one of the phone's sides, helping users to stay focused on their main screen without having to respond to calendar reminders or incoming emails.

It demonstrated a Virtual Reality headset that turns the Note 4 into the sort of immersive gaming platform once confined to consoles.

The Korean electronics giant says it will get more aggressive on pricing and focus on a narrower set of products for its mid-to-low tier products. The moves could help Samsung staunch a loss of market share but would inevitably undercut profit margins.

Mean estimates from a Thomson Reuters I/B/E/S survey of 40 analysts tips Samsung's third quarter operating profit to slide to 7 trillion Korean won ($6.86 billion), the weakest since the second quarter of 2012 and all but guaranteeing the company's first annual profit decline in three years.