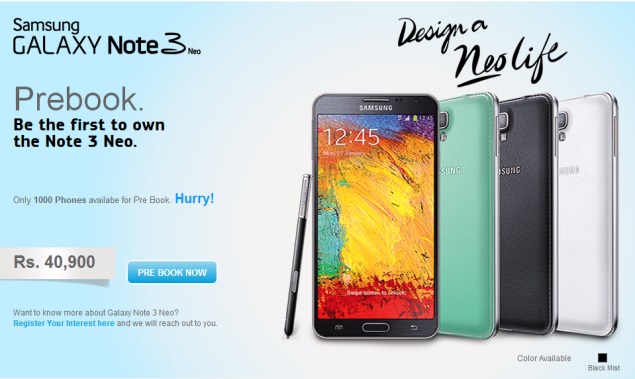 Samsung finally unveiled its Galaxy Note 3 Neo phablet for the Indian market on Tuesday at Rs. 40,990. However, the Samsung Galaxy Note 3 Neo is now up for pre-order in India at a discounted price of Rs. 38,990 from company's official online store.

Notably, the teaser image at the Samsung's official online store shows a Rs. 40,900 pricing, though when checking the pre-booking page reveals a discounted price of Rs. 38,990. The teaser image also notes that only 1000 units of Galaxy Note 3 Neo are available. It's worth pointing out that the Galaxy Note 3 Neo is only available in Black Mist colour variant at the official store.

Samsung unveiled the Galaxy Note 3 Neo phablet in January this year, without revealing the price details.