Samsung Galaxy Note 20 Ultra is tipped to have a triple rear camera setup with a 108-megapixel primary camera. 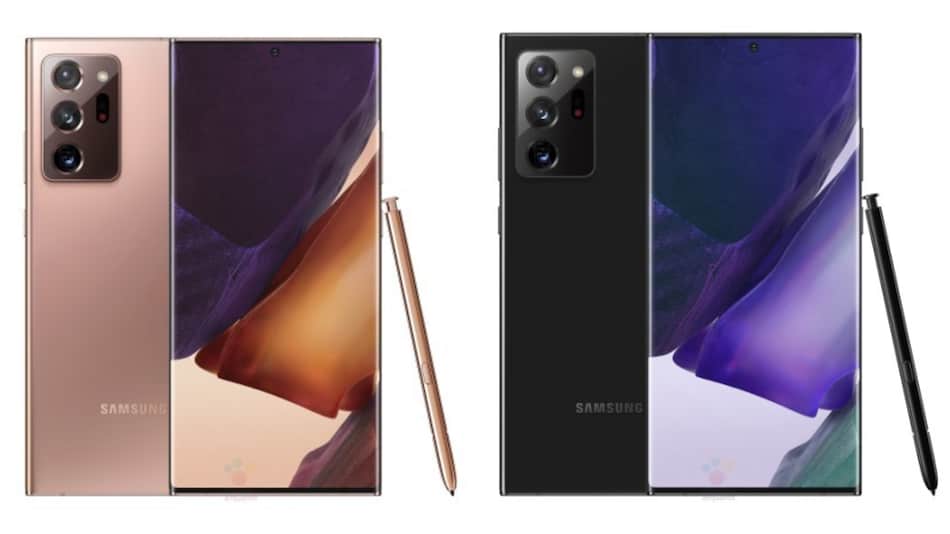 WinFuture.de has published multiple renders of the Samsung Galaxy Note 20 Ultra ahead of its launch next month. The renders suggest the phone will be launched in two options – Mystic Black and Mystic Bronze. Up front, the phone is seen to have a curved-edged Infinity-O display with the cut out placed in the top centre. It has an S Pen slot in the spine, and physical buttons sit on the right edge of the screen. The Samsung Galaxy Note 20 Ultra has a triple camera setup at the back that is touted to support 50x digital zoom as well. The phone is expected to have an in-display fingerprint sensor. Looking at the side-angle renders, there is a visible camera bump at the back.

Samsung Galaxy Note 20 Ultra has a laser autofocus system at the back
Photo Credit: WinFuture.de

Coming to the specifications, the report says that the Samsung Galaxy Note 20 Ultra will run on Android 10-based One UI, and support dual-SIM slots with additional eSIM functionality. It is expected to feature a 6.9-inch (1,440x3,200 pixels) dynamic OLED display with 120Hz refresh rate, curved edges, a 19.3:9 aspect ratio, 508ppi pixel density. It is touted to be the first phone to come with Corning Gorilla Glass 7 protection.

The Samsung Galaxy Note 20 Ultra is tipped to be powered by the 2.7GHz Exynos 990 octa-core processor paired with 12GB of RAM. Internal storage may be offered in 256GB or 512GB UFS 3.1 flash storage options with the freedom to expand further using the microSD card support.

As for the cameras, the Samsung Galaxy Note 20 Ultra may have a triple camera setup with a 108-megapixel sensor that has a f/1.8 maximum aperture and 0.8 micros sensor pixels. There's a second 12-megapipxel periscope sensor at the back with f/3.0 aperture and 1.0 micron pixels. The third sensor is also a 12-megapixel one offering an ultra-wide lens with f/2.2 aperture and 1.4 micros sensor pixels. At the back, Samsung has also integrated a laser-based autofocus system for better quality photos. Camera features are tipped to include 50x digital zoom and 8K video recording.

Connectivity options are expected to include USB Type-C, NFC, Bluetooth v5, Wi-Fi 6, dual GPS, among other things. It is tipped to be IP68 certified and have AKG-optimised stereo speakers on board. The S Pen is said to have a response time of less than 9 milliseconds, and the dimensions are said to be at 164.8x77.2x8.1mm. Features like face recognition, Samsung Pay, and Samsung Knox are expected to be integrated.

The Samsung Galaxy Note 20 Ultra is said to be optimised for cloud gaming via Microsoft's Project Cloud. Furthermore, buyers will have access to more than 90 gaming titles through the Xbox Game Pass. There's also tipped to be OneNote synchronisation for notes and Wireless DeX support. While there is no specific detail on the price, the report says that the Samsung Galaxy Note 20 Ultra should be priced above EUR 1,000 (roughly Rs. 86,100).