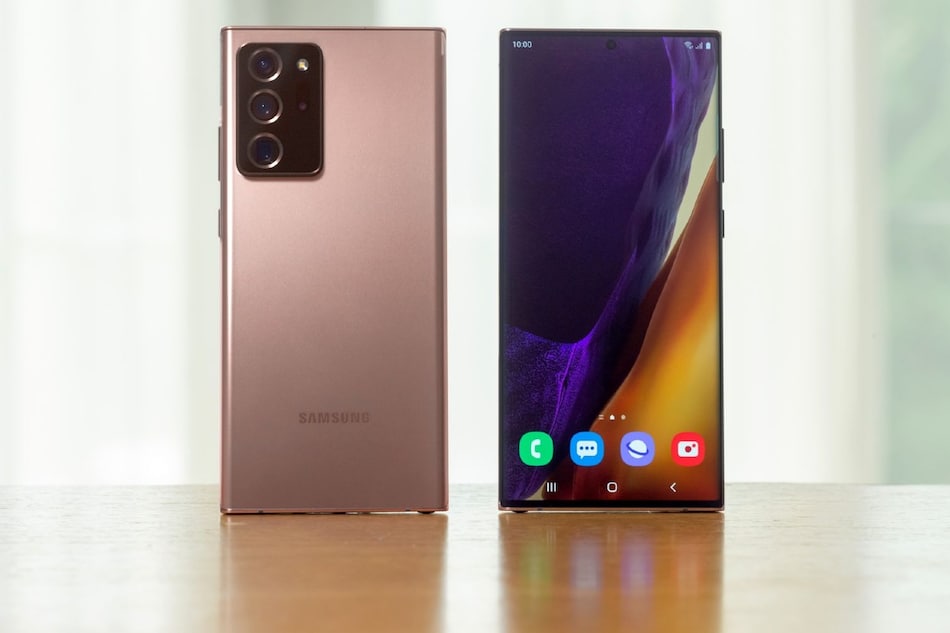 India pricing and availability details of the Samsung Galaxy Note 20 series are yet to be revealed. However, if we go by the rumours, the phones could debut sometime by the end of this month.

The dual-SIM (Nano) Samsung Galaxy Note 20 runs on Android 10 with One UI on top and features a 6.7-inch full-HD+ (1,080x2,400 pixels) Infinity-O Super AMOLED+ flat display with 60Hz refresh rate and 20:9 aspect ratio. Under the hood, there is an octa-core Exynos 990 or Qualcomm Snapdragon 865+ SoC - depending on the market. The phone also has 8GB RAM and comes with up to 256GB of onboard storage that isn't expandable via microSD card.

Samsung has provided a 10-megapixel selfie camera at the front of the Galaxy Note 20. The sensor has dual-pixel autofocus through an f/2.2 lens.

The Samsung Galaxy Note 20 has a range of connectivity options that include 5G, 4G LTE, Wi-Fi 6, Bluetooth 5.0, GPS/ A-GPS, NFC, and a USB Type-C port. The phone also has an in-display fingerprint sensor.

The Samsung Galaxy Note 20 comes with S Pen that has latency of 26 milliseconds. There is also a Microsoft Office stylus integration to let you convert your hand-written notes into a Word or PowerPoint file. Further, the phone comes with an upgraded Samsung Notes app to let you easily organise your notes under one roof.

The Samsung Galaxy Note 20 packs a 4,300mAh battery that supports a proprietary fast charging technology. Besides, the phone measures 161.1x75.2x8.3mm and weighs 192 grams.

The dual-SIM (Nano) Samsung Galaxy Note 20 Ultra also comes with Android 10 with One UI on top. However, unlike the standard model, the Galaxy Note 20 Ultra has a 6.9-inch WQHD (1,440x3,200 pixels) Infinity-O Dynamic AMOLED 2X curved-edge display with up to 120Hz refresh rate and 19.3:9 aspect ratio. The phone is powered by octa-core Exynos 990 or Qualcomm Snapdragon 865+ SoC, paired with 8GB and 12GB RAM options. There are also 128GB, 256GB, and 512GB of onboard storage options — along with microSD card support for further expansion, depending on support for 4G and 5G connectivity.

Just like the Galaxy Note 20, the Samsung Galaxy Note 20 Ultra has a 10-megapixel selfie camera sensor at the front, along with an f/2.2 lens.

Connectivity options on the Samsung Galaxy Note 20 Ultra include 5G, 4G LTE, Wi-Fi 6, Bluetooth 5.0, GPS/ A-GPS, NFC, and a USB Type-C port. There is also Wireless DeX support to let you convert the Galaxy Note 20 Ultra into a mini desktop. Additionally, the phone comes with an in-display fingerprint sensor.

For an advanced file transfer experience, the Samsung Galaxy Note 20 Ultra also has Ultra-Wide Band (UWB) support that powers a preloaded Nearby Share feature. This lets you quickly share a file with another UWB-equipped Galaxy phone user by pointing your Galaxy Note 20 Ultra towards that user. The new feature sounds similar to how Apple is using UWB on its iPhone 11 series. Further, there are plans to utilise the new hardware integration for finding things more accurately and unlock your home as a digital key.