The Galaxy Note 10 Pro may say goodbye to the headphone jack, but it could introduce a dedicated camera button. 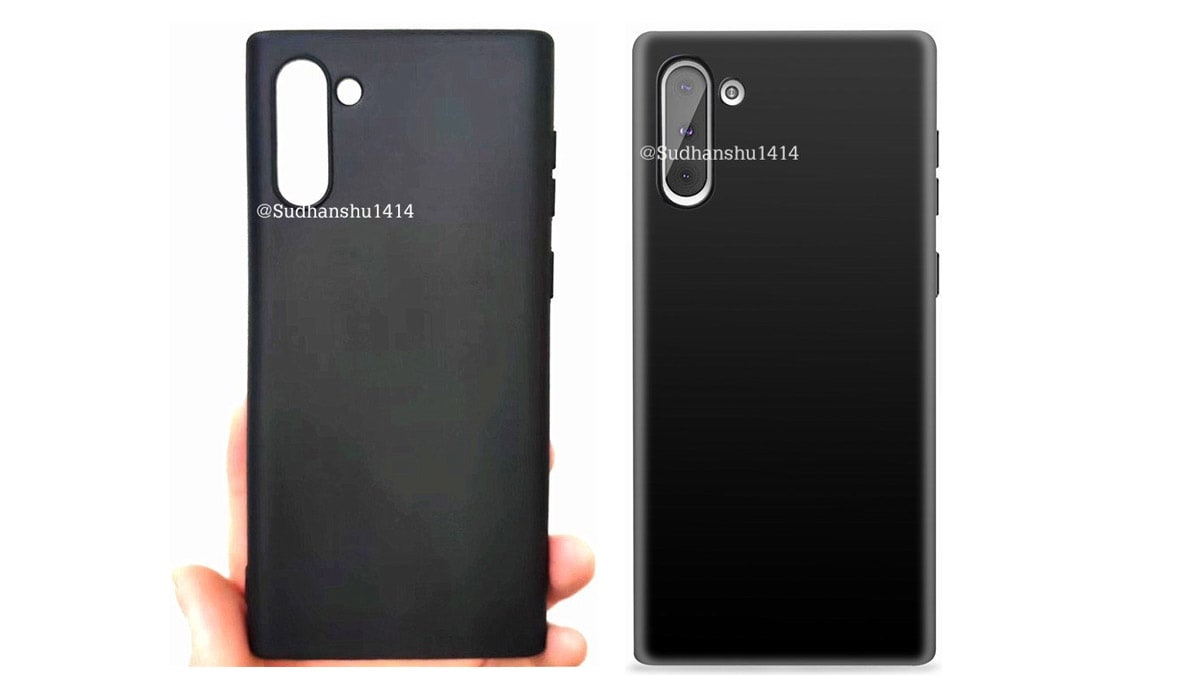 Now that we have a fair idea of when the Samsung Galaxy Note 10 is launching, we're starting to see more concrete leaks and rumours. The latest one comes in the form of a silicone case, which allegedly belongs to the Galaxy Note 10 Pro. If this is in fact accurate, then it confirms many of the previous leaks which suggested that the Galaxy Note 10 would have a vertical, triple camera setup at the back.

The live images were tweeted by tipster Sudhanshu Ambhore (@Sudhanshu1414), which shows a case for the Samsung Galaxy Note 10 and the Galaxy Note 10 Pro. The images are claimed to be “real life” cases of the upcoming phones and while Ambhore hasn't shared any additional information, the images tell us a lot about what we can expect from the new phones.

Other than the difference in screen size on the Galaxy Note 10 and Galaxy Note 10 Pro, the rear camera elements also seem different. The Galaxy Note 10 only has a single circular cutout for the flash where as the Pro model has a longer, pill-like cutout. This could indicate additional sensors such as a laser sensor or the heart-rate sensor. The case for the Pro model is also shown from multiple angles, which gives us a glimpse at the button layout and ports.

The one thing that's conspicuously missing is the Bixby button. This would make it the first Samsung flagship in recent years to ditch it. However, if you look a littler closer to the area at the bottom left side of the case, there seems to be another little bump, presumably for a dedicated camera button. Unless Samsung has repositioned the Bixby button towards the bottom, which doesn't seem logical, this would most likely be a button for the camera shutter. The case for the standard Galaxy Note 10 also seems to have this little bump at the bottom.

Looking at the cutouts for the ports, there are two of them on the top, which are claimed to be for an IR blaster and one for the microphone, which means the Galaxy Note 10 Pro will finally say goodbye to the headphone jack. The cutouts at the bottom are for the S Pen dock, a speaker grille, the USB Type-C port and the microphone. Removing the headphone jack isn't a very big deal any more if you ask us, but it will take sometime to get used to not having it on a Samsung flagship. It's yet to be seen if Samsung will still support microSD cards in its upcoming flagship.

Samsung is tipped to launch the Galaxy Note 10 in late-August and is rumoured to come in two screen sizes — a 6.4-inch display for the standard model and a 6.75-inch display on the Pro model. It should be powered by a Snapdragon 855 SoC in some markets, while others like India would get the Exynos 9820 variant. The device could also come with the newer UFS 3.0 flash storage, up to 12GB of RAM, and up to a 4,500mAh battery.