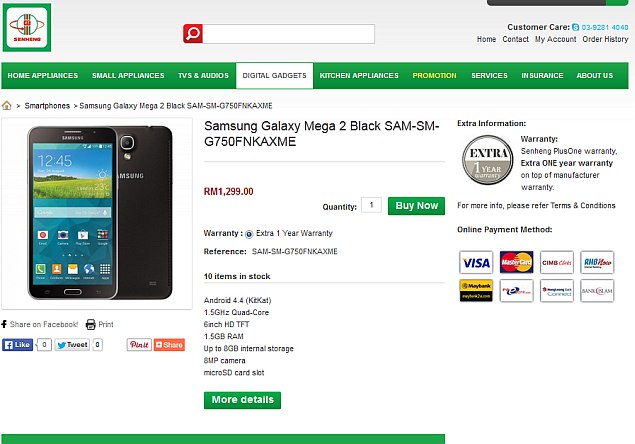 While Samsung is yet to officially announce the Galaxy Mega 2 smartphone, a Malaysian retailer has already started advertising the smartphone and has listed it as available to buy in the region at MYR 1,299 (roughly Rs. 24,700).

A Malaysian news website - Soyacincau - on Sunday first spotted a retailer named SenHeng advertising the Galaxy Mega 2 online as a part of its Maybank credit card promotional scheme, along with some specifications. The smartphone is listed for purchase separately.

According to the listing (which is still live at the time of writing), the Galaxy Mega 2 handset runs Android 4.4 KitKat out-of-the-box, and features a 6-inch TFT HD (720x1280 pixels) display. It is powered by a 1.5GHz quad-core processor (unspecified) paired with 1.5GB of RAM.

The Galaxy Mega 2 is listed to feature inbuilt storage of 8GB, with microSD card support (maximum capacity unspecified). The Galaxy Mega 2 also houses an 8-megapixel rear camera. No further specifications are listed by the Malaysian retailer.

While most of the above specifications are in-line with our previous reports, nothing can be confirmed until Samsung officially announces the successor to the Galaxy Mega 5.8 (Review | Pictures) and Galaxy Mega 6.3 (Review).

Some of the other rumoured specifications for the Galaxy Mega 2 include a 2.1-megapixel front-facing camera; a 2800mAh battery; 163.6x84.9x8.6mm dimensions; LTE Cat.4 connectivity with VoLTE support; and FM radio connectivity.

Previously, the unannounced Galaxy Mega 2 smartphone was spotted along with images and specifications in the database of China's Telecommunications Equipment Certification Center (Tenaa). The certified smartphone, bearing model number SM-G7508Q for China, is expected to be released as the Galaxy Mega 2 for China Mobile with TDD-LTE support (1900/ 2300/ 2600MHz).