Samsung Galaxy M51 may be powered by the Snapdragon 730 SoC and have 6GB or 8GB of RAM. 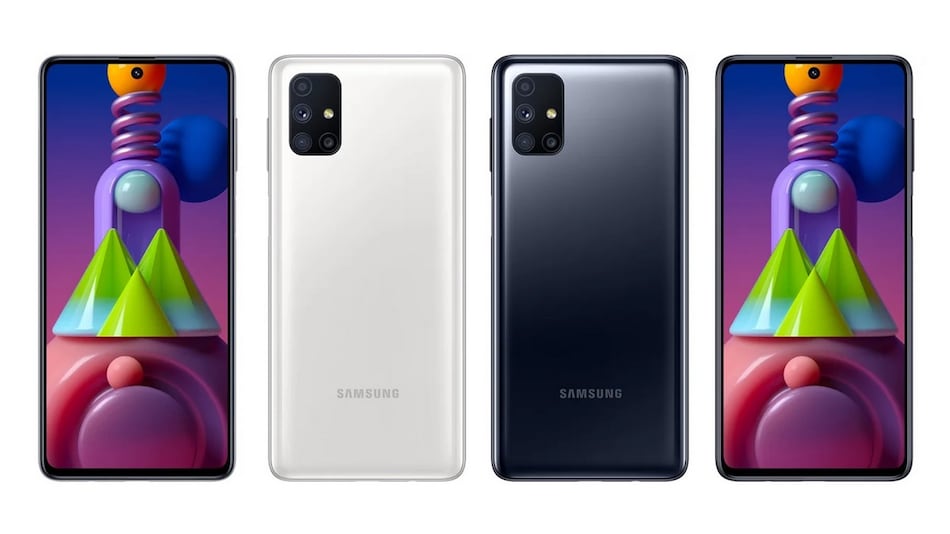 Samsung Galaxy M51 renders and specifications have been leaked by a known tipster on Twitter. While Samsung has not shared any information on the phone, the Galaxy M51 has been in the news for past several months, even more so in the past week. It has reportedly popped up on several certification websites and even on Samsung's support page. By now, nearly all the key specifications of the phone have been leaked. While the renders provide a new look at the phone, it seems to be a bit different from what was previously believed.

The Galaxy M51 renders shared by known tipster Sudhanshu on Twitter show the phone in two colour options - black and white. A quad rear camera setup can be seen on the back in an L-shape layout, housed in a rectangular camera module. The flash is placed within the module as well. At the front, the hole-punch cutout for the selfie camera appears to be in the centre, as opposed to the left corner as previously believed. The volume rocker can be seen on the right side, as well as what appears to be a side-mounted fingerprint scanner.

In a follow-up tweet, the tipster shared specifications for the Galaxy M51, a lot of which has been previously leaked as well. It is expected to come with a 6.67-inch full-HD+ (1,080x2,340 pixels) Super AMOLED display with 60Hz refresh rate, 386ppi pixel density and peak brightness of 420 nits. He also posted that the phone will be powered by the Qualcomm Snapdragon 730G SoC.

The Galaxy M51 may pack a massive 7,000mAh battery with 25W fast charging through a USB Type-C port. It may also have dual-SIM support, 3.5mm headphone jack, and storage expansion with a dedicated microSD card (up to 512GB). The Galaxy M51 is said to measure 163x78x8.5mm and weigh 213 grams.

Notably, a report by SamMobile suggests display specifications and measurements that contradict what has been leaked by the tipster. The report mentions a 6.7-inch Super AMOLED Plus display with 1,080x2,400 pixels resolution. It states that the phone measures 163.9x76.3x9.5mm. Rest of the specifications remain the same and the report adds that the Galaxy M51 will have 6GB or 8GB of RAM and 128GB of storage. The presence of Bluetooth 5.0, NFC, and FM has also been mentioned in the report.

The Samsung Galaxy M51 does not have an official release date or pricing details yet, but seeing as it has passed several certifications, the company may be looking to launch the phone soon.