Samsung Galaxy M42 5G will be powered by the Qualcomm Snapdragon 750G SoC. 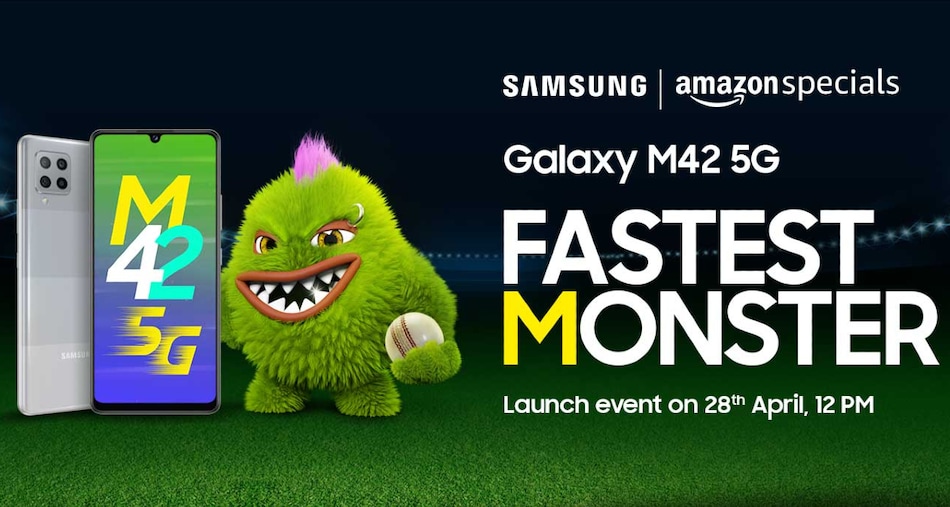 Samsung Galaxy M42 5G launch in India on April 28 has been confirmed. The phone was spotted on Amazon India where the launch date has been confirmed alongside a few other details. The design of the handset has also been revealed through the e-commerce site listing, and the Samsung Galaxy M42 5G is seen to sport a waterdop-style notch. At the back, the phone may feature a quad camera setup in a square shaped module and it is seen to have a multi-coloured striped finish.

The upcoming Samsung Galaxy M42 5G has been listed on Amazon India, and the dedicated landing page confirms that the phone will launch in India on April 28. The e-commerce site is taking registrations of interest and has made the ‘Notify Me' button live as well.

Amazon also confirmed that the Samsung Galaxy M42 5G will be powered by the Snapdragon 750G SoC and is teased to come with Samsung Knox security as well as Samsung Pay. Samsung Knox is a multi-layered security solution for smartphones that defends the most sensitive information from malware and malicious threats. With Samsung Pay integrated, the phone is likely to support NFC.

Past leaks suggest the phone may be priced in India between Rs. 20,000 and Rs. 25,000. Apart from Amazon India, the Samsung Galaxy M42 5G is also expected to be made available via Samsung online store and partnered retail outlets.

Coming to specifications, previous leaks suggest the Samsung Galaxy M42 5G may run on Android 11 operating system. It is tipped to pack 6GB and 8GB RAM options and may have 128GB storage capacity. The quad camera setup at the back is reported to feature a 64-megapixel main camera. Furthermore, the Samsung Galaxy M42 5G is expected to pack a large 6,000mAh battery. The phone has been spotted on NFC, BIS, and Wi-Fi Alliance certification sites recently.