Samsung Galaxy M32 5G will be powered by the MediaTek Dimensity 720 SoC and come with a quad-rear camera setup. 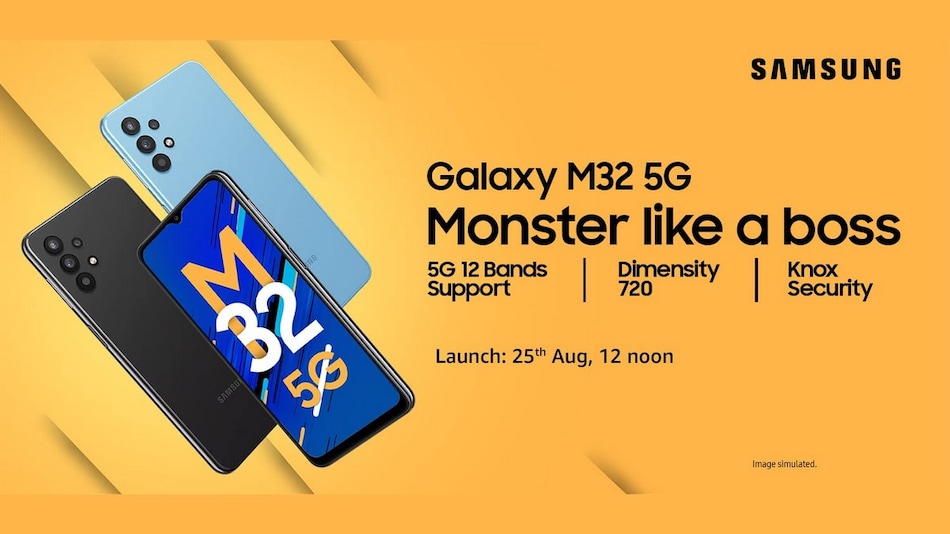 Samsung Galaxy M32 5G will be offered in two colours

Back in April, Samsung launched the Galaxy M42 5G expanding its range of 5G smartphones in the mid-tier range. Now it has announced that the next smartphone 5G smartphone in the series — Samsung Galaxy M32 5G — will launch in India on August 25 at 12pm (noon). A dedicated Amazon page has been set up as well revealing some of the specifications. The phone will be available for purchase in two colours from Samsung.com, Amazon, and select retail outlets.

Samsung Galaxy M32 5G will feature a 6.5-inch HD+ Infinity V display and be powered by the MediaTek Dimensity 720 SoC. It will have a quad-rear camera setup headlined by a 48-megapixel primary sensor. There will be a 13-megapixel selfie shooter up front. The company has also revealed the phone will be backed by a 5,000mAh battery and come with Samsung's Knox Security built in. Galaxy M32 5G will support 12 5G bands and will get two years of OS updates.

Last month, an alleged Geekbench listing hinted at 6GB of RAM and Android 11 for the Galaxy M32 5G. It also suggested the MediaTek Dimensity 720 SoC which has not been confirmed. It is likely that the 6GB RAM model will be one of the configurations the phone is offered in. It is also rumoured that the Galaxy M32 5G will be a rebranded Samsung Galaxy A32 5G that was launched in the European market back in January of this year.

The design of the upcoming Galaxy M32 5G seems very similar to the Galaxy A32 5G as well and the specifications revealed by Amazon also match those of the Galaxy A32 5G. If it is actually a rebranded phone, the Galaxy M32 5G can be expected to feature an 8-megapixel secondary sensor with an ultra-wide-angle f/2.2 lens, a 5-megapixel macro shooter with an f/2.4 lens, and a 2-megapixel depth sensor with an f/2.4 lens. It could also support 15W fast charging and come with surround support.