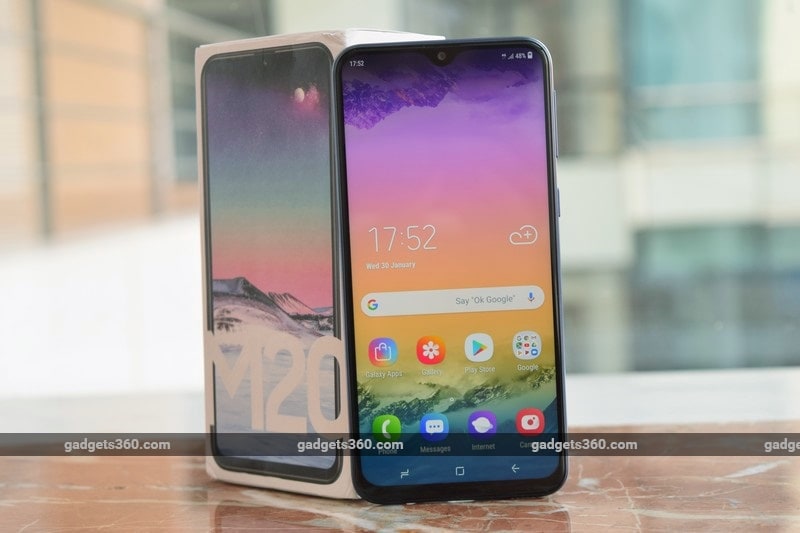 Samsung Galaxy M30, the anticipated next model in the newly debuted Galaxy M family, is likely to get official confirmation soon. But ahead of any launch details, the specifications of the Galaxy M30 have been detailed on Twitter. The smartphone is claimed to have an octa-core Exynos 7904 SoC and sport a full-HD+ display. Similar to the Galaxy M20, the Samsung Galaxy M30 is also rumoured to have a 5,000mAh battery. The new Samsung phone is also likely to have a gradient finish to counter a list of Chinese offerings.

Twitter user Sudhanshu Ambhore, who actively contributes on SlashLeaks, has leaked the purported specifications of the Samsung Galaxy M30. The source claims that the new smartphone will come with a 6.38-inch full-HD+ (1080x2220 pixels) display and include an Exynos 7904 SoC, coupled with 4GB of LPDDR4 RAM. The chipset is notably the one that powers the Galaxy M20 last month.

In terms of design, the Samsung Galaxy M30 is said to have a gradient finish with Blue and Black colour options. The tweet claiming the specifications of the next Galaxy M-series model also mentions that the phone will measure 159x75.1x8.4mm and will be 175 grams in weight.

Most of the Galaxy M30 specifications are identical to what was reported last month. However, the previous report mentioned an Exynos 7885 SoC on the upcoming Samsung phone instead of the newly launched Exynos 7904 SoC. Details about the RAM were also missing previously.

Samsung hasn't officially confirmed the Galaxy M30. Nevertheless, the smartphone was spotted on the Geekbench website back in December with model number SM-M305F. It was expected to debut alongside the Galaxy M10 and Galaxy M20 models in India last month.