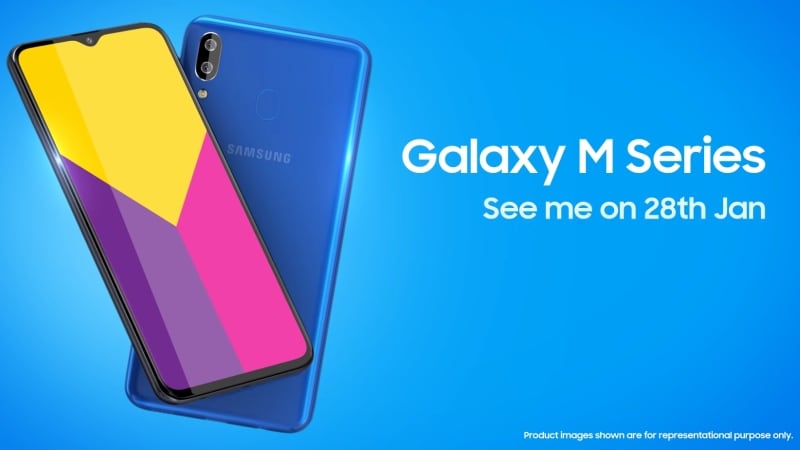 Samsung Galaxy M-Series is the new India-first lineup of smartphones from the South Korean electronics giant, and they will be launch in India on Monday. Ahead of that date, we wanted to give you a fair idea of what to expect from the Galaxy M-Series launch, and to that end, here's everything we know thus far about the smartphones, from the official titbits Samsung has teased to the numerous leaks and their accompanying specifications. So far, the company is rumoured to launch several Galaxy M-Series handsets, such as the Galaxy M10 and Galaxy M20, with the Galaxy M30 and Galaxy M50 also said to be in the pipeline.

Samsung earlier this month announced that the Galaxy M-Series of India-first smartphones will be launched on Monday, January 28. Stay tuned to Gadgets 360 for all the details from the launch itself. Samsung also revealed the new Galaxy M smartphones will go on sale on February 5 from Amazon India and the company's own online store. During its launch announcement, Samsung also said the new budget Galaxy M smartphones will be targeted at 'young millennials' and feature 'powerful' displays, cameras, batteries, and processors.

Separately, Samsung on its online India store and Amazon India put up teasers of the new budget smartphones, revealing the Galaxy M-Series will bear features like an Infinity-V Display, large batteries, fast charging, dual rear camera setups, and fingerprint sensors. A USB Type-C port, 3.5mm headphone jack, and bottom-facing speakers were also spotted, tipping their inclusion on at least on of the new models, if not all.

As we mentioned, Samsung Galaxy M10 and Galaxy M20 are expected to be the first to launch, with the also leaked Galaxy M30 and Galaxy M50 thought to make their way to retail shelves at a later date. Thus far, the Galaxy M10 and Galaxy M20 price in India have been leaked, as well as a bunch of specifications for all the smartphones. A recent listing on a Samsung app also tipped that the Android Pie update for the smartphones is only due in August, corroborating older leaks that detailed the Galaxy M-Series will launch with Android 8.1 Oreo on board.

The Samsung Galaxy M20 on the other hand is reported to also run Android 8.1 Oreo, and sport a 6.3-inch full-HD+ (1080x2340 pixels) resolution. It's said to be powered by Samsung's Exynos 7885 SoC and come with 3GB and 4GB of RAM options. The Galaxy M20 is said to have a dual rear camera setup with a 13-megapixel primary sensor with an f/1.9 aperture and a 5-megapixel secondary sensor with an f/2.2 aperture. The 5-megapixel will reportedly be used to capture wide-angle shots. The Galaxy M20 is said to come with 32GB/ 64GB of inbuilt storage, and include a microSD card slot for memory expansion. It is said to feature a massive 5,000mAh battery with fast-charging support.

Finally, we come to the Samsung Galaxy M50 - unfortunately though, not much is known about this smartphone beyond it supposedly featuring an AMOLED display instead of the LCD displays said to be used on the three other rumoured models. It can be expected to run Android 8.1 Oreo at launch as well.