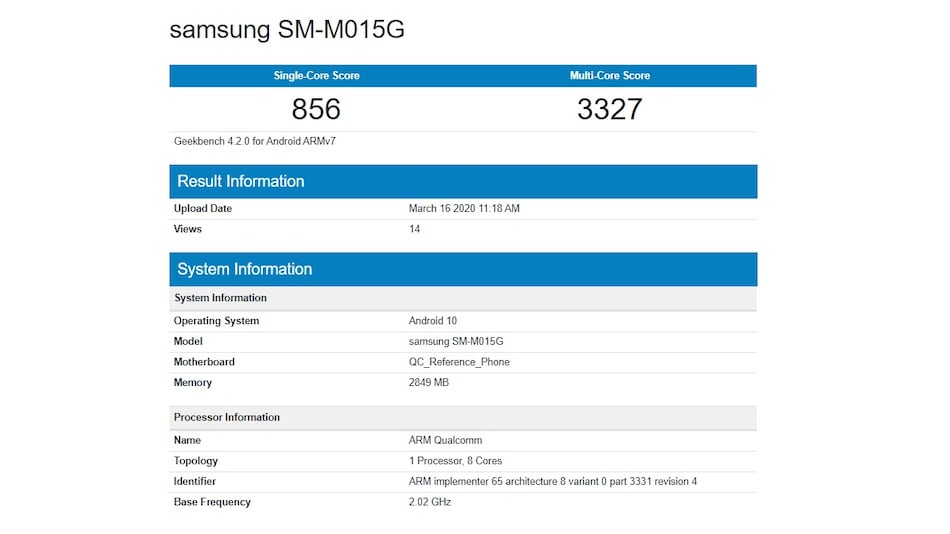 Samsung Galaxy M01 is expected to have an ARM Qualcomm processor

Samsung Galaxy M01 might be the new addition to the company's ‘M' series of smartphones. A phone with the model number SM-M015G was spotted on Geekbench, in line with the rest of Samsung phone model numbers. The listed phone has 3GB RAM and an ARM Qualcomm processor. According to reports, the alleged Samsung Galaxy M01 is in development for India, Sri Lanka, Russia, and Nepal. There has been no official word from the company on the new phone so take this information with a grain of salt.

The Geekbench listing shows the model as ‘samsung SM-M015G' and the motherboard is listed as ‘QC_Reference_Phone'. The RAM stated in the listing is 3GB which might be one of the variants the phone will come in. The Samsung Galaxy M01 is also listed to run Android 10 out-of-the box. Coming to the processor, it states ARM Qualcomm chip with eight cores and a base frequency of 2.02GHz. The SM-M015G got a single-core score of 856 and a multi-core score of 3,327.

A report by SamMobile states that the alleged Samsung Galaxy M01 will come with 32GB of storage and have three colour options to choose from namely, Black, Blue, and Red. The report also claims that the CPU listing on Geekbench has the same description as the Snapdragon 439 which is present in Samsung's Galaxy A01.

The Galaxy A01 was announced in December last year and came with a 5.70-inch display, 2GB RAM, and 16GB storage which was expandable via microSD card. It had dual rear cameras and a single selfie camera housed in a water drop notch. The Galaxy A01 has a 3,000mAh battery.