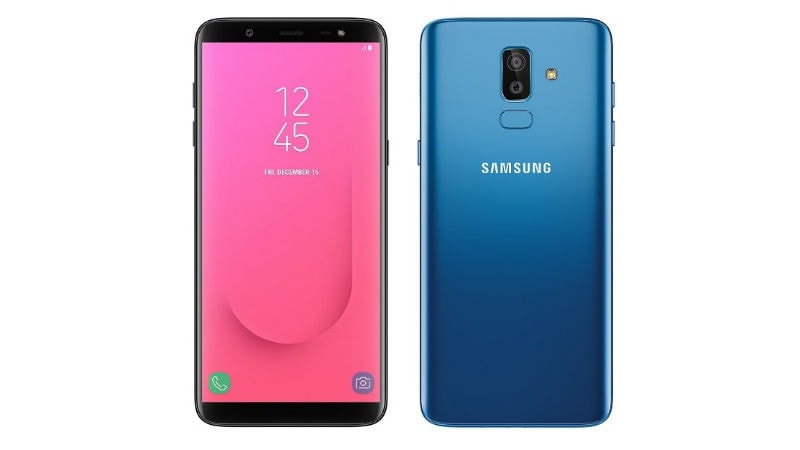 Samsung Galaxy J8 smartphone is finally available to buy in India today. Earlier this week, Samsung had announced that the handset will be available in the country starting June 28, and on Wednesday, the company confirmed the rollout. The smartphone is a part of Samsung's Infinity Display series, and it was launched in India last month alongside the Galaxy J6. The key highlights of the Galaxy J8 include an 18.5:9 Super AMOLED Infinity Display, and Android 8.0 Oreo. The smartphone also supports Face Unlock and has artificial intelligence features like object and scene detection.

The dual camera in the Galaxy J8 comes with a 'Live Focus' feature that users can bring focus to the foreground while blurring out the background. Users can adjust the level of background blur both before and after capturing an image. "Our signature Infinity display, Chat Over Video and Samsung Mall are already a hit amongst millennials and with Galaxy J8, we have focused more on the camera, which is one of the most used features for the millennial today," said Sumit Walia, Director, Mobile Business, Samsung India. "With the Galaxy J8, consumers can customize their images without any third party app and we are confident that they will love the flagship Live Focus feature and industry-first features like Portrait Dolly, Portrait Backdrop, and Background Blue shape."

The Samsung Galaxy J8 has been priced at Rs. 18,990 and will be available from today (June 28). The smartphone will be available across retail outlets and online via Samsung's e-shop, Paytm, Flipkart, and Amazon. The handset comes in in Black, Blue, and Gold colours variants, but there is only one configuration - 4GB RAM/ 64GB inbuilt storage - available in India.

The dual-SIM (Nano) Galaxy J8 runs Samsung Experience on top of Android 8.0 Oreo. The smartphone comes with a 6-inch full-HD+ Super AMOLED 'Infinity display' with an 18.5:9 aspect ratio. It is powered by the octa-core Qualcomm Snapdragon 450 SoC coupled with 4GB of RAM.

The Galaxy J8 has a dual camera setup on the back, with a 16-megapixel primary sensor and a 5-megapixel secondary sensor for depth-of-field effects. At the front is a 16-megapixel camera with an aperture of f/1.9. Both front and rear cameras have a single LED flash. There is 64GB of inbuilt storage, expandable via microSD card (up to 256GB). The smartphone facial recognition and has a variable selfie flash which allows users to adjust the exposure while capturing selfies.

Connectivity options on the Galaxy J8 include 4G VoLTE, Wi-Fi, Bluetooth, GPS/ A-GPS, a Micro-USB port, and a 3.5mm headphone jack. The smartphone also has a feature called 'Chat over Video' that allows users to chat on WhatsApp and the default messaging app whilst watching videos. The feature, which Samsung claims has been developed by their Indian R&D team, overlays a translucent chat window and keyboard over the video being played. The handset also come with a few memory management features like move to memory card, delete duplicate images, zip unused apps and delete saved APK files. The phone comes with Samsung Mall functionality, and Samsung Pay Mini for mobile payments.

Jared Leto to Play Morbius in Spider-Man Spin-Off Movie
Inside Amazon's Indian Original Comicstaan, Which Wants to Make You Laugh and Learn