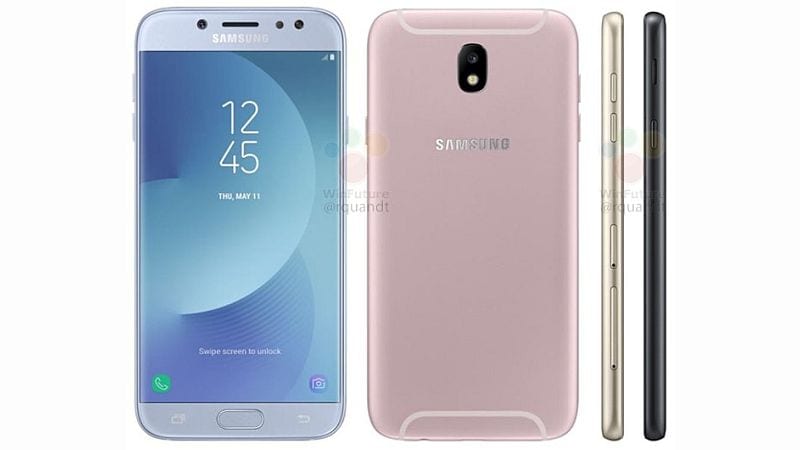 Samsung Galaxy J7 (2017) has been spotted in a new leaked render that claims four colours - Blue, Black, Gold, and Pink. The new leaked render come courtesy Roland Quandt, who has a decent track record with leaks of smartphones ahead of their official announcement. Much like the previously leaked render, the new render of the alleged Galaxy J7 (2017) shows a design refresh at the back panel. The front, however, looks identical to the current J7 (2016) version.

The highlight of the new design refresh is the new antenna bands at the back which aren't just two lines running at the top and bottom. The company has chosen to go with "U" shaped antenna lines at the back which gives the handset a new look. The primary camera and LED flash has also received refresh, and appear to have been put together in an oval design on the Samsung Galaxy J7 (2017).

Rumoured specifications of the Galaxy J7 (2017) claim that the smartphone will feature a 5.5-inch full-HD AMOLED display, 1.6GHz octa-core processor, 3GB RAM, and 16GB of inbuilt storage. The battery is said to 3600mAh, while the predecessor packed only a 3300mAh battery.

Samsung Galaxy J7 (2017) is rumoured to launch alongside the Galaxy J5 (2017) in the coming weeks. Notably, the Samsung Galaxy J3 (2017) was recently unveiled by AT&T in the US. Some of the leaked specifications of the Galaxy J5 (2017) include a 5.2-inch HD AMOLED display, a 1.4GHz octa-core processor, 2GB of RAM and 16GB of storage. The smartphone is said pack a 3000mAh battery, while the predecessor came with a 3100mAh battery.