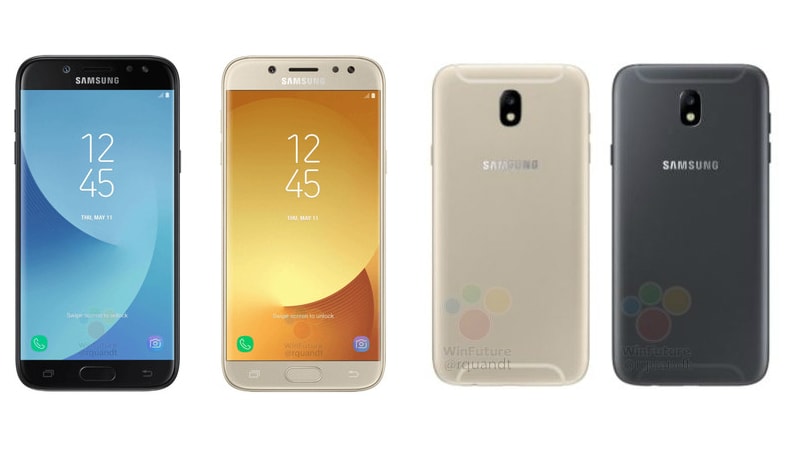 Samsung’s upcoming iterative updates for the Galaxy J5 (2016) and Galaxy J7 (2016) have been leaked in images. Specification details have also been outed, comparing them with their predecessors and showing what upgrades they bring.

A site called Tweakers.net has published specifications of the Galaxy J5 (2017) and Galaxy J7 (2017), and have compared it with their predecessors as well. Both the smartphones are said to now sport a full metal body, run on the latest Android Nougat software, and come with fingerprint scanning support underneath the Home Button. They are claimed to also support 4G VoLTE, something that was missing in the predecessors. While the rear cameras on both the smartphones remain at 13-megapixel, the front cameras see a bump to 13-megapixel as well with front flash. On the 2016 variants, the front camera was at 5-megapixel with no flash support.

Other tipped specifications on the Galaxy J5 (2017) include a 5.2-inch HD sAMOLED display, a 1.4GHz octa-core processor, 2GB of RAM and 16GB of internal storage. The smartphone packs a 3000mAh battery, while the predecessor packs a 3100mAh battery. All of the other specifications are similar to its predecessor.

On the Galaxy J7 (2017), rumoured specifications include a 5.5-inch full-HD sAMOLED display, a 1.6GHz octa-core processor, 3GB RAM, and 16GB of internal storage. The battery amps up to 3600mAh, while the predecessor packs only a 3300mAh battery.

Design wise, there’s not much of a change, and WinFuture.de’s leaked images hint that there is a U shaped pattern at the back for a little differentiation. Of course, there’s now a metal unibody instead of just a metal frame seen on the predecessor. The camera structure also has been changed to a vertical capsule format.