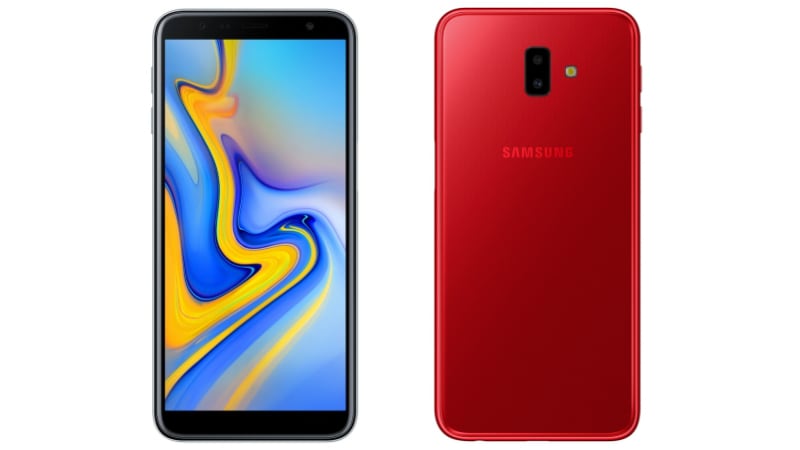 Samsung Mobiles on Tuesday announced the launch of two new smartphones in its mid-range segment, the Galaxy J4+ and Galaxy J6+ after the phones were leaked aplenty in the past few weeks. Both smartphones sport large 6-inch HD+ Infinity Displays. They also come with 3,300mAh battery units, Android 8.1 Oreo, and dual-SIM support. Additionally, the Galaxy J6+ exclusively sports a side-mounted fingerprint sensor and dual rear cameras. Let's see what the Samsung Galaxy J6+, Galaxy J4+ specifications and other details are.

Samsung Galaxy J4+ and Galaxy J6+ price in India have not been announced yet, but an update is expected in the following days. Earlier this week, a report had claimed that the two phones would be priced in the Rs. 10,000-20,000 price segment when they officially arrive in the market. Availability is also ambiguous right now. Samsung Galaxy J6+ will be available in Black, Grey, and Red colour options. Galaxy J4+ gets Black, Gold, and Pink variants.

The Galaxy J4+ runs Android 8.1 Oreo out-of-the-box, and sports a 6-inch HD+ (720x1480 pixels) Infinity Display with an 18.5:9 aspect ratio. The handset is powered by an unnamed quad-core SoC clocked at 1.4GHz, coupled with 2GB/ 3GB of RAM and 16GB/ 32GB of onboard storage. In terms of optics, the Galaxy J4+ bears a single 13-megapixel rear camera sensor with f/1.9 aperture, coupled with an LED flash. On the front, the smartphone gets a 5-megapixel selfie camera with an f/2.2 aperture.

Connectivity options include 4G VoLTE, single-band Wi-Fi 802.11 b/g/n, Bluetooth v4.2, GPS, GLONASS, NFC (depending on region), and a 3.5mm headphone jack. Sensors onboard the Galaxy J4+ include accelerometer, ambient light sensor, and proximity sensor. There is a 3,300mAh battery under the hood, however support for fast charging has not been revealed. Dimensions of the phone are 161.4x76.9x7.9mm and weight is 178 grams.

In the camera department, the phone gets a dual rear camera setup with a 13-megapixel primary sensor (f/1.9 aperture) and a 5-megapixel secondary sensor (f/2.2 aperture). On the front, the handset sports an 8-megapixel selfie camera sensor with f/1.9 aperture. Connectivity options on the smartphone include 4G VoLTE, single-band Wi-Fi 802.11 b/g/n, Bluetooth v4.2, NFC, GPS, GLONASS, and a 3.5mm headphone jack.

Sensors onboard the Galaxy J6+ include accelerometer, ambient light sensor, geomagnetic sensor, gyroscope, a proximity sensor, and a side-mounted fingerprint sensor. It has the same 3,300mAh battery under the hood. The handset measures the same 161.4x76.9x7.9mm and weighs 178 grams.