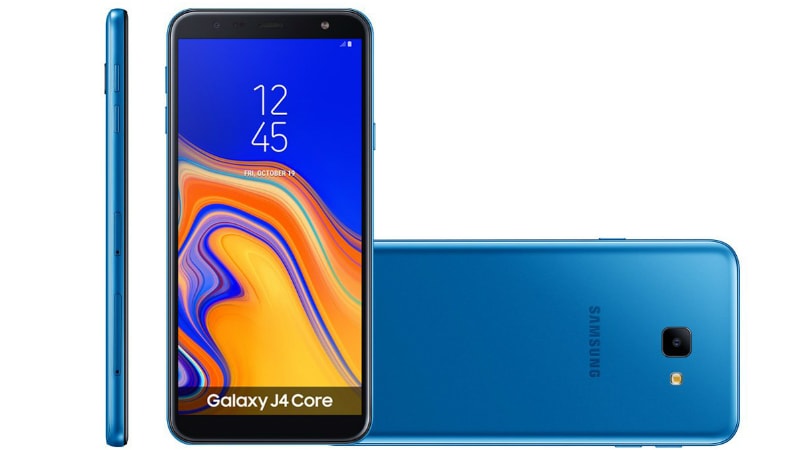 Samsung Galaxy J4 Core has been listed on a Brazilian store

Samsung is apparently looking to expand its Galaxy J4 series, and a listing in Brazil for the Android Go-based Galaxy J4 Core smartphone has now been spotted. The listing seems to be an error, with the store claiming that the smartphone is out of stock. However, the listing is still alive, and it reveals the smartphone's design and specifications as well. The device is seen sporting a Blue colour, and the budget offering packs a 1GB RAM, 16GB storage, and a dual-SIM tray slot.

The Colombo.com store lists the Android 8.1 Oreo (Go edition) Samsung Galaxy J4 Core as supporting dual-SIM slots, and featuring a 6-inch HD+ (720x1480 pixels) display with 18:9 aspect ratio and a 274ppi pixel density. The listing states that the J4 Core is powered by an 1.4GHz quad-core CPU paired with 1GB of RAM. Internal storage it at 16GB, and this is further expandable using a dedicated microSD card slot (up to 256GB).

Optics include an 8-megapixel rear camera with f/2.2 aperture and autofocus, paired with an LED flash. At the front, there is a 5-megapixel sensor with LED flash as well. Camera modes include panoramic, Pro, dynamic focus, auto, super slow-mo, emoji AR, and timelapse.

Connectivity is listed to include 4G, Bluetooth 4.2, Wi-Fi 802.11 b/g/n, GPS, GPRS, and more. The Samsung Galaxy J4 Core packs a 3,300mAh battery, and sensors on board include accelerometer, geomagnetic, proximity and light sensor. The smartphone weighs 170 grams, and the dimensions are listed to be at 160.6x76.1x7.9mm.