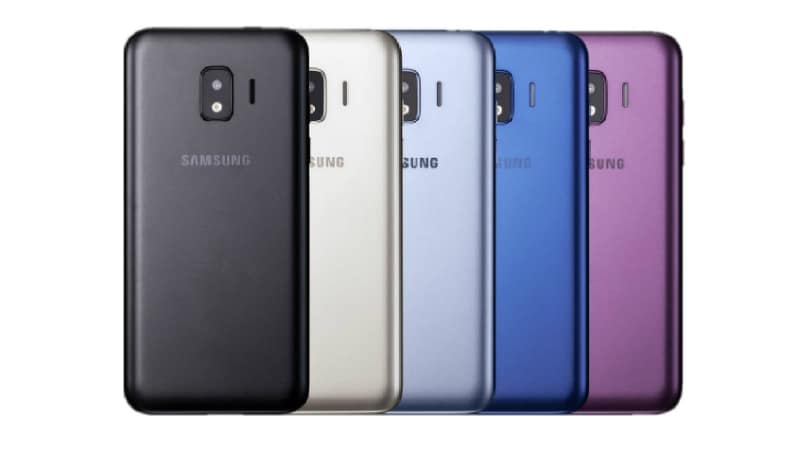 Samsung Galaxy J2 Core, expected to be the first Android Go smartphone from Samsung, has now been leaked in a press render. The render shows multiple colour options of the Galaxy J2 Core. It also exhibits a design similar to the schemas surfaced recently on an official user manual. The user manual notably confirmed the presence of a removable battery pack and a bunch of Android Go apps on the smartphone, including Files Go, Maps Go, and Google Go. If we believe an off late Geekbench listing, the Galaxy J2 Core could feature a 5-inch Super AMOLED display and include a quad-core Exynos 7570 SoC.

The press render, leaked by SamMobile, shows the back of the Galaxy J2 Core alongside highlighting its five colour options, including Blue and Purple. It also highlights the whole-plastic construction that includes a matte back panel. Further, it appears that there is a loudspeaker grill at the back of the smartphone that sits against the camera setup that has a single image sensor and LED flash. Samsung's branding is also at the back - similar to various existing Galaxy-Series models.

The tweet posted by SamMobile that features the press render doesn't reveal any specifications of the Galaxy J2 Core. However, the Geekbench listing surfaced in the recent past highlighted that the model will have a 5-inch Super AMOLED display and a 1.4GHz quad-core Exynos 7570 SoC, paired with 1GB of RAM and 16GB of onboard storage. It is also expected that the smartphone will come with an 8-megapixel rear camera, 5-megapixel front camera, and a 2,600mAh battery.

Samsung is said to be already testing the Galaxy J2 Core in many global markets, including India, Nepal, Bangladesh, and Sri Lanka among others. It also comes in multiple variants that carry model number SM-J260F, SM-J260G, and SM-J260M. The user manual surfaced earlier this month suggested that despite being an inferior, Android Go model, the Galaxy J2 Core could feature Samsung Experience UX along with on-screen gesture controls and on-screen navigation keys. The smartphone is also found to have a Smart Switch app to help users easily transfer their data between two devices.