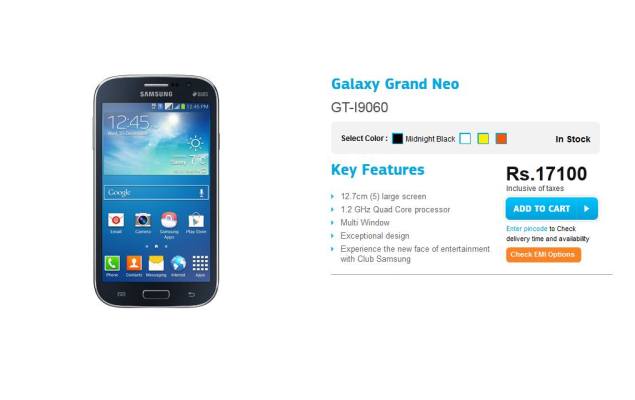 Samsung has officially slashed the price of Galaxy Grand Neo to Rs. 17,100. The smartphone is available on Samsung India's official online store at the new price, though the street price across physical and online retail stores may be even lower.

Notably, the Galaxy Grand Neo was launched in India alongside the Galaxy note 3 Neo in February carrying a price tag of Rs. 18,450.

Samsung Galaxy Grand Neo is a dual-SIM (dual standby) device which features a 5.1-inch TFT display with WVGA (480x800 pixel) resolution. The Android 4.2 Jelly Bean-based smartphone is powered by a 1.2GHz quad-core Cortex A7 processor, alongside 1GB of RAM.

The Galaxy Grand Neo carries a 5-megapixel rear camera and a VGA (0.3-megapixel) front-facing camera. It also comes with LED-flash support and auto-focus feature for the rear camera, along with 720p video recording capability.

The Samsung Galaxy Grand Neo comes with 16GB in-built storage, which can be expanded up to 64GB via microSD card. The handset also has support for 3G networks, along with Wi-Fi 802.11 b/g/n (2.4GHz), Wi-Fi Direct, Bluetooth 4.0 LE, and GPS/AGPS connectivity options.

On Friday, the Samsung Galaxy S5 went on sale in over 125 countries across the globe, including India. The phone has been priced at Rs. 51,500 in India.