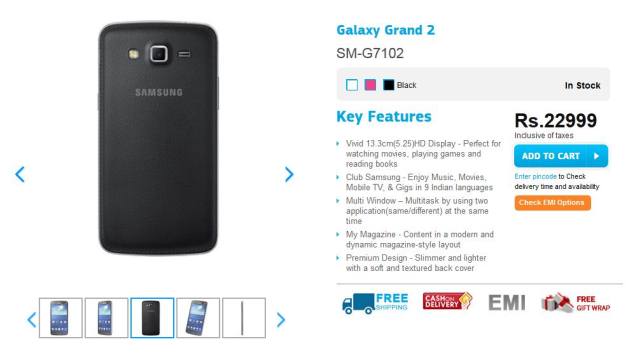 Samsung Galaxy Grand 2 is now listed in two more colour variants on its official India online store - Black and Pink. The Black colour variant is now up for sale, whereas the Pink colour variant will soon be available, and currently features a 'Notify me' option.

Samsung had launched the Galaxy Grand 2 mid-range smartphone in India at Rs. 22,999 on January 17. Initially, the phone was available only in White colour variant with Samsung promising it to be later available in Black and Pink as well.

The Samsung Galaxy Grand 2 runs Android 4.3 Jelly Bean out-of-the-box, and is a dual-SIM device with support for GSM+GSM. It features a 5.2-inch HD TFT display with a resolution of 720x1280 pixels.

The Galaxy Grand 2 is powered by a 1.2GHz quad-core Qualcomm processor alongside 1.5GB of RAM. It sports an 8-megapixel autofocus rear camera accompanied by an LED flash. It also houses a 1.9-megapixel front-facing camera. It comes with 8GB of inbuilt storage, which is further expandable up to 64GB via microSD card.

Connectivity options on the Galaxy Grand 2 include Wi-Fi, Bluetooth, GPS/ A-GPS, Micro-USB and 3G (HSPA+). The smartphone measures 146.8x75.3x8.9mm and weighs about 163 grams. The Galaxy Grand 2 packs a 2600mAh battery that can deliver up to 17 hours of talktime.

Now Samsung is further expected to unveil its next flagship at unPacked 5 event in Barcelona.