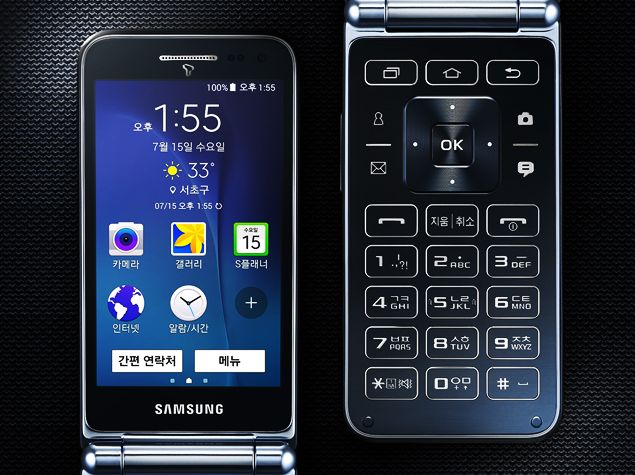 Soon after LG launched its Android 5.1 Lollipop-based Gentle flip phone, Samsung has followed its South Korean counterpart with the launch of the Galaxy Folder flip phone. The new Samsung clamshell smartphone has been launched in South Korea at KRW 297,000 (approximately Rs. 16,350). The smartphone is expected to go on sale next month in Korea.

So far, there is no word about the availability of the Samsung Galaxy Folder flip phone outside the Korean market. Considering that Samsung back in 2013 launched the Galaxy Golden flip phone in the Indian market, pricing it at Rs. 51,900, it is a possibility that the flip phone might be announced for India as well.

The Samsung Galaxy Folder features a 3.8-inch touchscreen display. Unlike Samsung's previous top-end flip phones that sported dual displays - on the inside and the outside of the top-half - the Galaxy Folder comes with a single touchscreen.

The phone runs Android; though there is no clarity on which version for now. The processor and RAM value of the new Samsung flip phone have also not been revealed as of now. It comes with 8GB of built-in storage which can be expandable via microSD card.

The Galaxy Folder flip phone sports an 8-megapixel rear camera without flash and a 2-megapixel front camera. Connectivity options on the handset include Wi-Fi, GPS / A-GPS, 3G, LTE, and Bluetooth. It packs an 1800mAh battery, with no word on talk time and standby time.

The Galaxy Folder is said to be the successor of the flip phone launched back in 2013 with the same name.

LG's Gentle flip phone was launched in South Korea priced at KRW 200,000 (approximately Rs. 11,000). The LG Gentle flip smartphone features a single 3.2-inch LCD touchscreen with a resolution of 320x480 pixels. It runs Android 5.1 Lollipop and the flip phone is powered by a 1.1GHz quad-core processor (unspecified chipset) alongside 1GB of RAM. There is 4GB of inbuilt storage on board, and the Gentle flip phone supports expandable storage (unspecified maximum storage limit) via microSD card. It sports a 3-megapixel rear camera with LED flash, while also includes a 0.3-megapixel front camera. It bears a 1700mAh removable battery.