Separately, Samsung also released a new video with a slew of warnings about the Samsung Galaxy Fold, and the amount of care it requires. 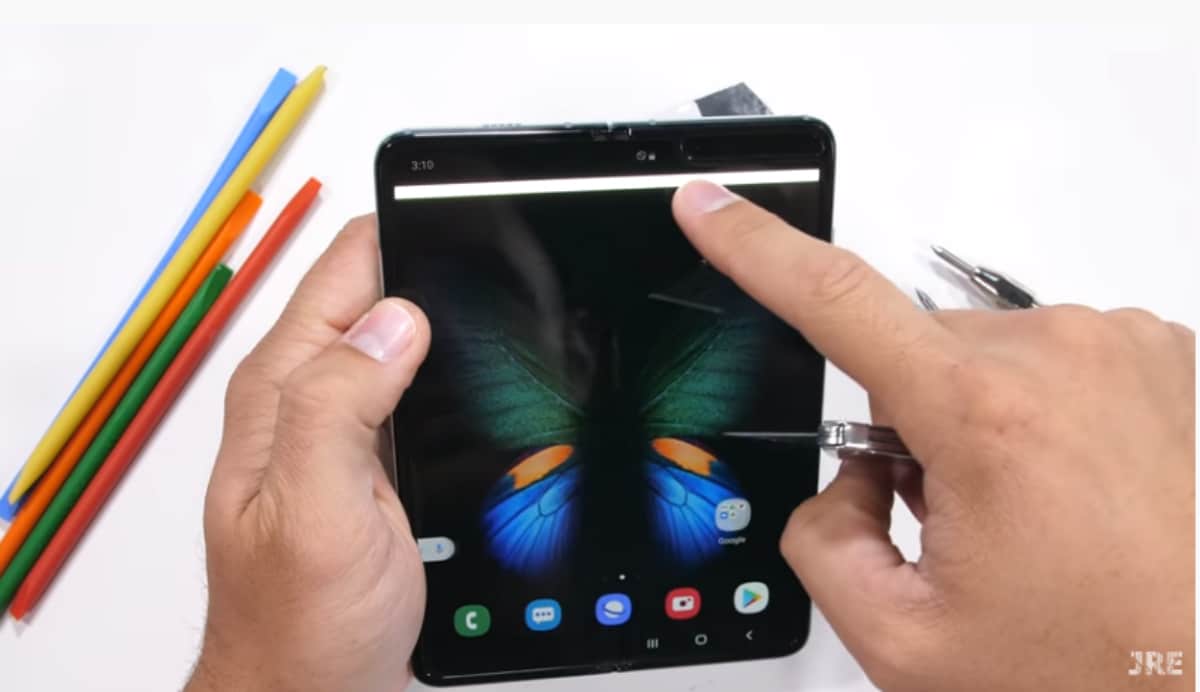 Samsung Galaxy Fold is finally ready for a relaunch, and the phone was up for display at IFA 2019 as well. JerryRigEverything has now published a video with a series of harsh tests carried out on the phone, to see how fragile it is. He conducted a bend test, scratch test, flame test, and even pured some sand on it, to test out the hinge's dust resistance capabilities. Separately, Samsung also released a new video with a slew of warnings about the Samsung Galaxy Fold, and the amount of care it requires.

Talking about Zack Nelson's testing first, the video starts off with unboxing the Samsung Galaxy Fold, and it shows that the box houses charging accessories, the Galaxy earbuds and manual. The phone is first put through the scratch test and the outside small screen scratches at 6, with deeper grooves at 7, similar to most phones out there. The inside big screen, disappointingly, starts scratching at number 2. What's more, Nelson can induce scratches onto the screen by just using his fingernails as well.

The sides of the phone are made of metal, including the buttons, thereby scratching easily. During his testing, he accidentally nipped a side of the screen with his metal scratching tool, and this little action managed to kill an entire bar of pixels up top. This left a permanent white bar on the top of the screen, and rendered that portion unusable on most occasions. Jokingly, Nelson compares the screen hardness to play dough, soggy bread, and a $2,000 stick of chewing gum.

The sand test shows that the phone will not be able to survive a day at the beach, as little sand sprinkled on the display inadvertently leads to sand permanently grinding inside the hinge. It is unfortunate that the sand gets into the phone so quickly. The flame test is a positive with the displays – both the inside and the smaller screen outside - completely recovering even after exposed to flame for more than 10 seconds.

Finally the bend test shows how powerful the hinge is as even after putting a lot of pressure, the phone doesn't crack. The antenna bands are seen to give away a little bit, but the phone, overall, passes the bend test. You can watch the full JerryRigEverything video below:

Coming to the new video posted by Samsung titled ‘Caring for your Galaxy Fold', it details all the things you must do if you're an owner of the new phone. It says that the display comes with a protective film, and an additional one is not required. Looking at Nelson's video, it seems that even slight pressure put on the screen to remove or apply the protection could lead to further damage. The video says to use a light touch, which again asserts that the phone will be damaged if a lot of pressure is applied. It says to keep the hinge away from water and dust, and keep valuables like credit cards and keys away from the phone, due to the magnets inside the hinge. Of course, if any slip up does occur, Samsung has its Galaxy Fold Premier Service for its top-tier customers.