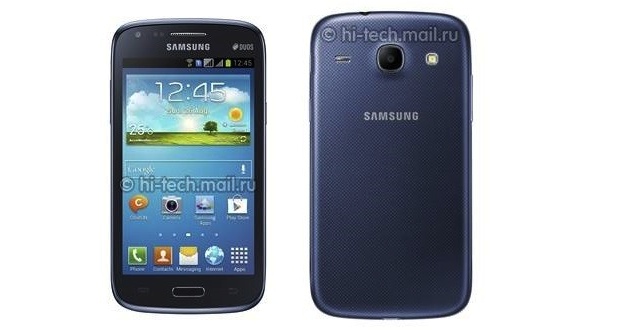 While Samsung has just made its flagship smartphone, the Galaxy S4, available in different parts of the world, pictures of one of its new mid-range Android phone, Galaxy Core, have surfaced online on a Russian forum via GSMArena. The phone's model number is GT-18262.

The Galaxy Core is reportedly a dual-SIM phone that sports a 4.3-inch screen with a 480x800 pixels resolution. Powered by a 1.2GHz dual-core processor, the smartphone will have 768MB RAM and will run Android 4.1.2 and feature Samsung's TouchWiz interface layer on top.

The phone will sport a 5-megapixel camera and offer 8GB of internal storage which would be expandable through a microSD card. It will offer Wi-Fi, Bluetooth 4.0 and GPS connectivity options.

The Samsung Galaxy Core is expected to launch in Russia and China in mid-May with a 320 Euros (Rs.23,000 approximately) price tag.

The dual-SIM functionality indicates that the phone will also target emerging markets like India, though, obviously, there's no official word on that yet.

A few weeks back, benchmark results had indicated the presence of the Samsung Galaxy Ace 3, another mid-range Android smartphone. Benchmarks had indicated that the phone, also known as the GT-S7272,  will be powdered by a dual-core Broadcom CPU clocked at 1GHz and a VideoCore IV GPU. It's also likely to have a screen resolution of 480×800 (WVGA). The Galaxy Ace 3 will run on Android 4.2.2 Jelly Bean with Samsung's Nature UX 2.0 out of the box. Another report had mentioned that the phone will be launched in May end or beginning of June. So it appears that, as usual, Samsung wants to cover all product segments with a variety of offerings with its Android smartphone line-up.
Affiliate links may be automatically generated - see our ethics statement for details.
Comments

Samsung Galaxy S4 will soon carry the 'Made in India' tag
IPL 2013: Mobile viewers consume over 9 lakh hours of video so far