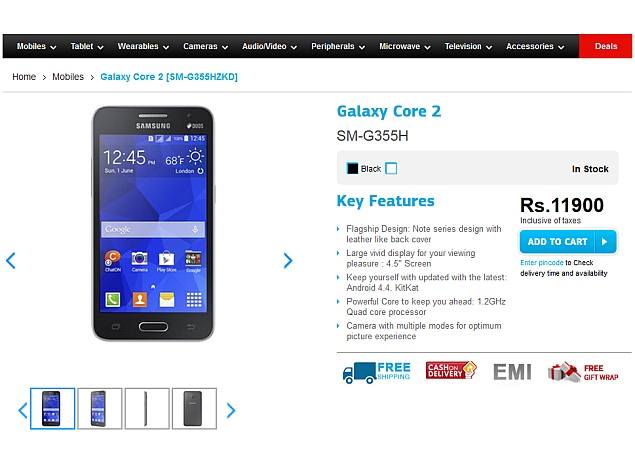 Samsung has silently launched the Galaxy Core 2 smartphone in India at a price of Rs. 11,900. The Galaxy Core 2 is now available in Black and White colours via Samsung's official online India store.

It is powered by a quad-core processor clocked at 1.2GHz coupled with 768MB of RAM. The Galaxy Core 2 sports a 5-megapixel autofocus rear camera with LED flash and VGA (0.3-megapixel) front-facing camera. The 4GB of inbuilt storage on the Galaxy Core 2 is expandable via microSD card (up to 64GB).

Connectivity options on the smartphone include Wi-Fi b/g/n, Bluetooth 4.0, Micro-USB and 3G. The Samsung Galaxy Core 2 is powered by a 2000mAh battery. The handset measures in 130.3x68x9.8mm and weighs 138 grams.

On Monday, Mumbai-based retailer Mahesh Telecom had also tweeted a live picture of the Galaxy Core 2 along with a suggested selling price of Rs. 11,599, against an MRP of Rs. 13,950, and stock availability starting Tuesday.