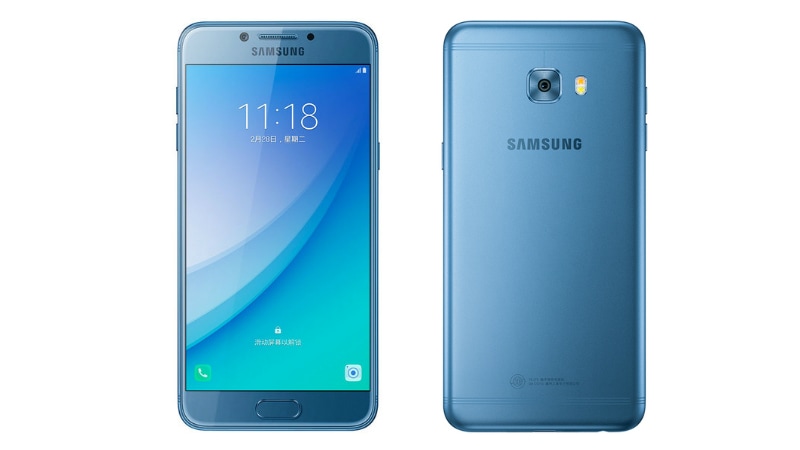 After the launch of the Galaxy C7 Pro two months ago, Samsung has decided to launch to the Galaxy C5 Pro smartphone in China. The device is priced a CNY 2,499 (roughly Rs. 24,100) and is already available for pre-order on Samsung's China website. The Samsung Galay C5 Pro will begin shipping from March 16.

Just like the Samsung Galaxy C7 Pro, the Galaxy C5 Pro will also be made available in Lake Blue, Maple Leaf, and Powder Rose colour variants. The Galaxy C5 Pro is essentially just a smaller variant of the Galaxy C7 Pro smartphone. It has a metal unibody with antenna bands seen on the top and bottom chin at the back. The back camera is situated in the top centre slightly protruding, while the Home Button in the front has the fingerprint sensor embedded. The speaker grille, the USB Type-C port, and the 3.5mm audio jack are all situated at the bottom edge of the device. The volume buttons are on the left edge, while the power button is on the right edge of the smartphone.

As for the specifications, most of it matches the larger variant except for display, battery, weight, and dimensions. The Samsung Galaxy C5 Pro is a hybrid dual-SIM smartphone that runs on Android 6.0 Marshmallow, and sports a 5.2-inch full-HD (1080x1920 pixels) Super AMOLED display. It is powered by the Snapdragon 625 octa-core Cortex-A53 chipset clocked at 2.2GHz. The smartphone packs a 4GB of RAM, offers 64GB of internal storage with the option to expand further via a microSD slot (up to 256GB).

As for optics, the Samsung Galaxy C5 Pro has a 16-megapixel rear camera with f/1.9 aperture and flash support, and a similar 16-megapixel lens at the front which is also capable of recoding video at 1080p at 30fps. The smartphone packs a 2600mAh battery that claims to last up to 296 hours of standby time. Connectivity options include Bluetooth v4.2, Wi-Fi 802.11a/b/g/n, USB Type-C port, 3.5mm audio jack, GPS, NFC, and 4G LTE support.

WikiLeaks CIA Files Show the Agency Can Turn Your TV Into a Mic, Bypass Encryption in Popular Apps, and Possibly Control Your Car
iPhone 6 32GB vs OnePlus 3T vs iPhone SE: Best Buy Under Rs. 30,000?