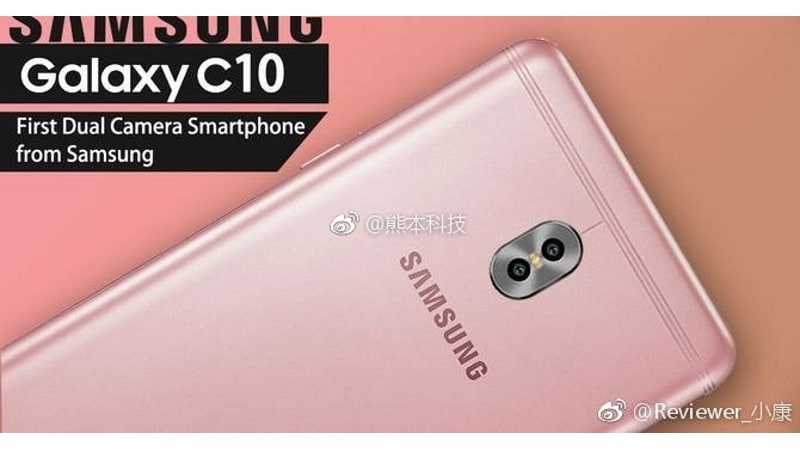 While Samsung Galaxy Note 8 was earlier tipped to be the first Samsung phone to feature a dual-camera setup, new leaks suggest that company's C10 smartphone might leapfrog and take the honour. Freshly leaked images of Samsung Galaxy C10 not only suggest that the phone will feature a dual camera setup but also that it will be the first smartphone from the South Korean company to have this camera configuration.

The leaked image of Galaxy C10 smartphone, posted on Weibo, suggest that the smartphone will be made available in a Rose Colour variant, as pointed out in Android Headlines report. While there seems to be no additional information provided with the leaked image, the antenna lines and metal body are clearly visible. The power button seems to be located on the right side of the smartphone.

Further, the Samsung Galaxy C10 seems to sport dual-LED flash, present in between the dual rear cameras at the back of the smartphone. As there have been no earlier leaks regarding the phone, we will have to wait for the official announcement from the company to get more details.

A recent leak suggested that Samsung Galaxy Note 8 will sport a 6.3-inch display and will also feature a dual-camera setup. The smartphone has been tipped to feature a dual camera setup which will consist of a 12-megapixel wide-angle CIS supporting dual photodiode, and a 13-megapixel telephoto CIS. It will support 3X optical zoom, come with dual 6P lenses, and support dual OIS as well.