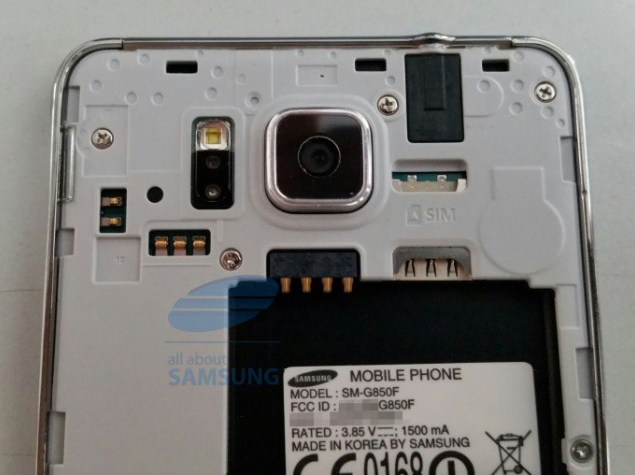 The rumour mill has been spewing out several conflicting launch dates for the anticipated metal-clad Samsung Galaxy Alpha (aka Galaxy S5 Prime and Galaxy F). First a report claimed the August 13 launch, then on Wednesday it was rumoured for August 4, and now yet another report claims the launch of the rumoured Galaxy Alpha will be on August 13 itself.

On Thursday a German website named Allaboutsamsung had published a report scrapping the August 4 release date from Sammobile, and claimed the rumoured metal-clad Samsung Galaxy Alpha smartphone will launch on August 13. The website also published purported specifications of the handset, along with an image of the alleged Samsung Galaxy Alpha's back without the panel (showing the SIM card slot and model number, as well as visible metal seams), as well as purported Galaxy Alpha AnTuTu benchmark screenshots.

The purported image and benchmark screenshots of the Galaxy Alpha shows the devices' model number to be SM-G850F. It appears that the smartphone will come with support for only a single SIM (Nano-SIM), and will not support storage expandability via microSD card. Notably, the website claims it is unsure about if the smartphone seen in the image is the final design that will appear on shelves, and that it is waiting for Samsung to launch the device on August 13. 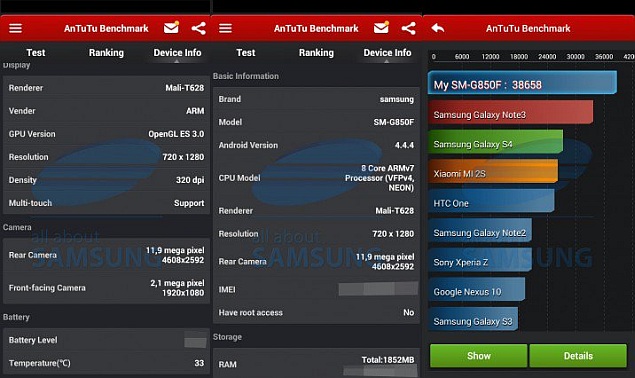 The purported Galaxy Alpha AnTuTu benchmark screenshots reveals a 720x1280 pixel display resolution with a pixel density of 320ppi for the rumoured 4.8-inch screen. The other leaked specifications of the anticipated Galaxy Alpha include an octa-core Exynos 5433 SoC with a Mali-T628 GPU; 2GB of RAM; 32GB of inbuilt storage; a 12-megapixel rear camera; a 2.1-megapixel front camera, and Android 4.4.4 KitKat.

Earlier this week, the alleged metal-clad Samsung Galaxy Alpha was purportedly spotted in a user agent (UA) profile on Samsung's support site, as well as on Samsung's developer console, once again pointing to a 720p display resolution.
Comments