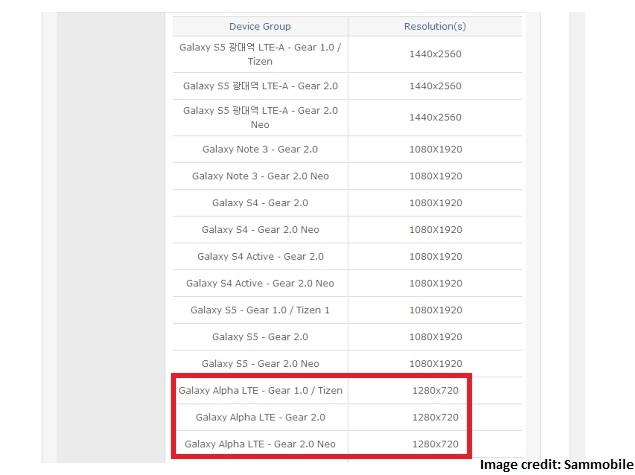 The long rumoured Samsung Galaxy F aka Galaxy S5 Prime aka Galaxy Alpha has now been spotted in a user agent (UA) profile on Samsung's support site, as well as on Samsung's developer console.

While expected to be the premium variant of the Samsung Galaxy S5 (Pictures | Review), the rumoured Galaxy Alpha on the UA profile page (with model number SM-G850F) and developer console doesn't seem very premium - if a report by Sammobile is to be believed. The website posted an image of the developer console (see above) with a 720x1280 pixels resolution listed alongside the Galaxy Alpha LTE model - further corroborating expectations the device will be called Galaxy Alpha, and not Galaxy S5 Alpha or Galaxy F or Galaxy S5 Prime.

As indicated by recent leaks about the Galaxy Alpha, the smartphone will sport a 4.8-inch display. If the above mentioned resolution is correct, then the Galaxy Alpha will feature a display that's similar both in size and pixel density to the Galaxy S III launched in 2012.

Earlier the smartphone was rumoured to launch on August 13 as the Galaxy Alpha. A Korean website citing industry sources had claimed it to be a premium variant of Galaxy S5 to counter the LG G3 Cat.6 launched last week.

While there is no official word on Galaxy Alpha or other variants of the Galaxy S5 yet, it seems a rumoured premium variant could also be in works alongside the Galaxy Alpha.

As learnt from some of the previous reports, Samsung might offer a similar Galaxy S5 sized QHD (1440x2560 pixels) display to counter the LG G3. As far back as last year, reports suggested that Samsung had already started mass producing a 5.25-inch Quad-HD (1440x2560 pixels) AMOLED display. So far, other rumoured specifications of the anticipated Galaxy S5 Prime smartphone include a Qualcomm Snapdragon 805 processor, and 3GB of RAM.
Comments

Outlook.com for Android Gets Offline Access, Server-Side Search and More
Flipkart Raises Record $1 Billion in Fresh Round of Funding