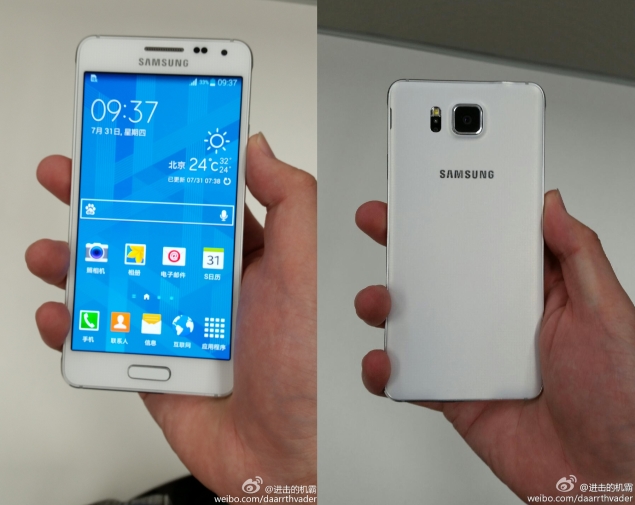 The yet-to-be-announced metal-clad Samsung Galaxy Alpha briefly went up for pre-order in the UK at GBP 549 (approximately Rs. 56,400). The smartphone is rumoured to launch on August 13.

Although the listing by Mobilefun for the 32GB Samsung Galaxy Alpha has now been removed, it had mentioned several specifications, as spotted by TheInquirer. No release date was given by the retailer.

According to the report, the listed specifications of the Galaxy Alpha included a 4.7-inch (720x1280 pixels) Super AMOLED display with a pixel density of 320ppi; a 12-megapixel rear-facing camera with "super-fast autofocus" and LED flash; a 2.1MP front-facing camera; 32GB of built-in storage; a fingerprint sensor; 4G LTE, and Bluetooth 4.0. As this is a third-party retailer, the specifications have to be taken with a pinch of salt - though they seem to match previous leaks.

While an earlier report had indicated the anticipated Galaxy Alpha will come with model number SM-G850F, another report now suggests that the smartphone will have different model numbers for different wireless carriers.

Last week, the anticipated Galaxy Alpha smartphone was spotted with a 720p display in a user agent (UA) profile as well as on Samsung's developer console.

In the meanwhile, the anticipated Galaxy Alpha has also been purportedly leaked by a Weibo user in images that showcase all sides of the alleged white variant. While the handset in the images appears to have the same design seen in earlier leaked images of the black variant, we cannot comment on the authenticity of the images at this point of time.
Affiliate links may be automatically generated - see our ethics statement for details.
Comments