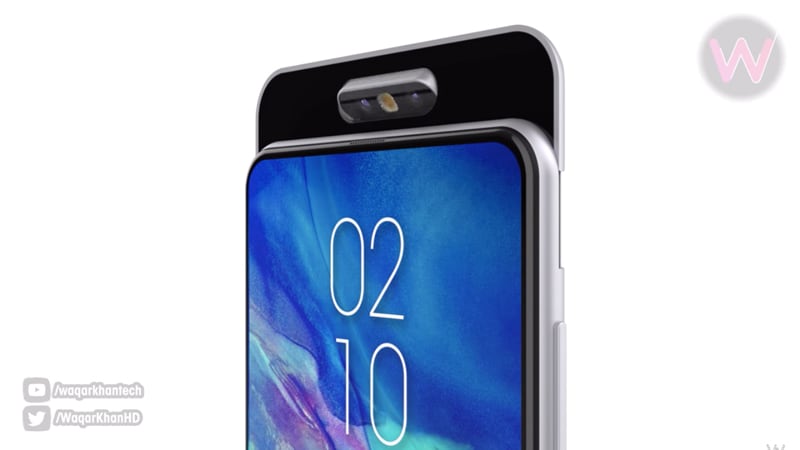 Samsung Galaxy A90 is now part of a new set of leaks, based around a render video that shows its innovative slider and rotating camera module. In the last couple of days, we have seen multiple smartphone leaks from the Galaxy A series, and an April 10 global launch event is also scheduled that should see fruition to all of these leaks. It looks like Samsung has clearly set its focus on this series now after the launch of the Galaxy S series. We have seen multiple leaks of the Samsung Galaxy A90 in the past, and have also spotted a Samsung Galaxy A series microsite that listed the Samsung Galaxy A90 with a notchless display. The phone is rumoured to feature Snapdragon 710 SoC and up to 8GB of RAM.

As we mentioned, a fresh render video of the Samsung Galaxy A90 has been leaked and tips the notchless design of the smartphone as well as the slider mechanism that houses the rotating camera module. The render video was posted by Waqar Khan who has leaked multiple smartphones renders in the past. We had seen rumours in the past which hinted that the Galaxy A90 will have a notchless display and a pop-up selfie camera. The same report also hints that the Samsung Galaxy A90 will have an in-display fingerprint scanner, powered by a Qualcomm Snapdragon 710 SoC, have 6GB or 8GB RAM and 128GB of internal storage.

From the leaked render video it is clear that Samsung is still using a traditional earpiece instead of an acoustic display like the one Huawei is using for the P30 Pro. In the video, it is also clear that the Galaxy A90 will have an in-display fingerprint scanner which confirms the previous leak. At this point, it is hard to say if the device will have face-recognition to unlock the smartphone since it would be really slow to unlock the smartphone. The Galaxy A90 has two moving parts, the first being the sliding mechanism and the other is the rotating camera module.

Samsung has scheduled the launch of the Galaxy A90 for April 10th, so it looks like we will only have to wait for a few days for the full details including price and availability.

Laakhon Mein Ek Season 2 Trailer — Biswa Kalyan Rath Trains His Lens on Government Healthcare
Windows 10 May 2019 Update Announced, Users Will Get Much More Control Over When and How it is Installed