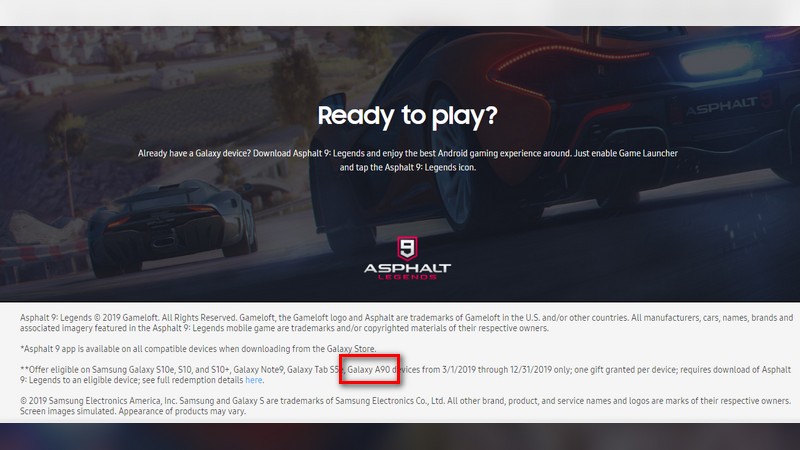 Samsung Galaxy A90 - an anticipated new Galaxy A-series phone - is inching closer to its official launch. The upcoming smartphone has been listed on the official Samsung US website, indicating that the Galaxy A90 will hit the shelves soon. While not much is known about the specifications, the Galaxy A90 is listed on the Samsung US website alongside Asphalt 9 and the promise of exclusive content and freebies for the buyers. However, the listing does not reveal anything about the specifications, availability and the estimated pricing of the Galaxy A90.

The Galaxy A90 has already appeared in a host of leaks, but its appearance on the official Samsung US website is an indication that it might be launched soon. The Galaxy A90 is listed alongside its Galaxy S10 siblings and is among the smartphones that will get exclusive Asphalt 9 content as a gift. The Galaxy A90's marketing with the likes of the Galaxy S10 and a graphics intensive game like Asphalt 9 indicates that the upcoming smartphone will be a powerful gaming machine and might come equipped with a high-end processor.

Unfortunately, there is no mention of any other hardware specifications, and neither the website lists any details about the estimated pricing and availability of the Galaxy A90. As for the exclusive gift itself, the Galaxy A90 is among a handful of devices including the Galaxy S10 series, the Galaxy Note 9, and the Galaxy Tab S5e that will be eligible for a free Lotus Evora Sport 410 sports car in the game. The Galaxy A90 users will also get 50,000 Asphalt 9 credits, 250 tokens, and 10 premium card packs. The smartphone's listing on the Samsung US website was spotted by GalaxyClub.

In order to avail the freebies, users will have to download Asphalt 9 from the Galaxy Store on their smartphone. Moreover, Samsung promises that users of the eligible devices stand to win free exclusive items and rewards throughout the year and will also get a chance to participate in special events. Earlier this month, the Galaxy A90 was also listed on the official Samsung UK website too.

The upcoming Galaxy A-series smartphone is rumoured to sport a sliding and rotating camera, but as per concept renders and another leak, it might feature a pop-up selfie camera and will sport the New Infinity Display without a notch or hole-punch. The device is tipped to come equipped with an optical in-display fingerprint sensor and a 6.41-inch display. The Galaxy A90 will reportedly be powered by the Snapdragon 710, while One UI based on Android Pie will handle things on the software side.