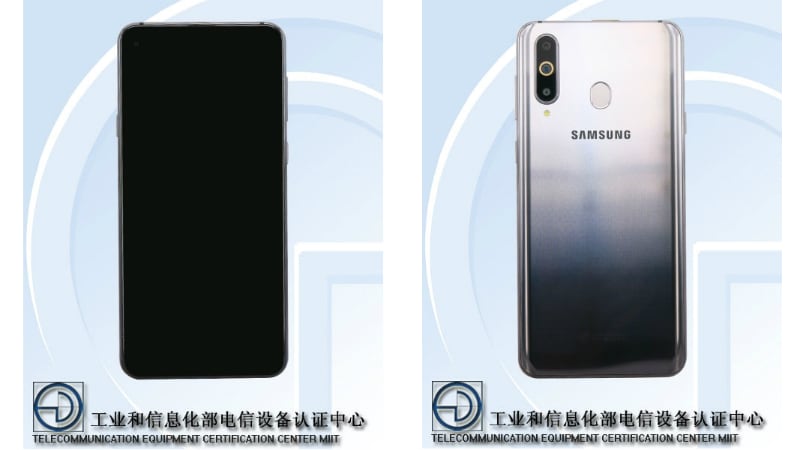 Samsung's first-ever smartphone with a selfie camera cutout, the Galaxy A8s, is set to launch today at an event scheduled in China at 4pm CST (1:30pm IST). Just ahead of the unveiling, the Samsung Galaxy A8s has been spotted on Chinese certification website TENAA where some of the key specifications and design elements have been revealed. The South Korean manufacturer has been teasing the launch of its new smartphone for the past few days; it is likely to become the company's first to sport an Infinity-O display panel, unveiled by Samsung last month.

As per the document uploaded on TENAA's portal earlier this month, the Samsung Galaxy A8s, with model number SM-G8870, is seen from all angles. While the smartphone's display is switched off, we can still spot the selfie camera hole placed on the top right corner of the panel. However, it is not possible to determine the extent of bezels on the smartphone from the image.

On the back of the handset is a vertically stacked triple rear camera setup, coupled with an LED flash. The camera appears to have a significant bump, when seen from the side. There is a small, oval-shaped fingerprint sensor on the back, alongside standard Samsung branding. Right of the Galaxy A8s sports the lock/ power button and the volume controls on top of each other. And then on the left is a SIM tray and another hardware button, possibly a dedicated trigger for Samsung's Bixby virtual assistant.

Yet another document uploaded on TENAA reveals certain specifications of the phone. The dual-SIM Samsung Galaxy A8s is said to sport a 6.39-inch display panel, which is rumoured to be of the Infinity-O kind with a 19.5:9 aspect ratio. The listing suggests the phone will sport a 3,300mAh battery, with no fast charging standard specified. Other than that, dimensions of the smartphone are 158.4x74.9x7.4mm, and it comes with connectivity options including Bluetooth and GPS. The Samsung Galaxy A8s TENAA listings were first spotted by Fonearena.