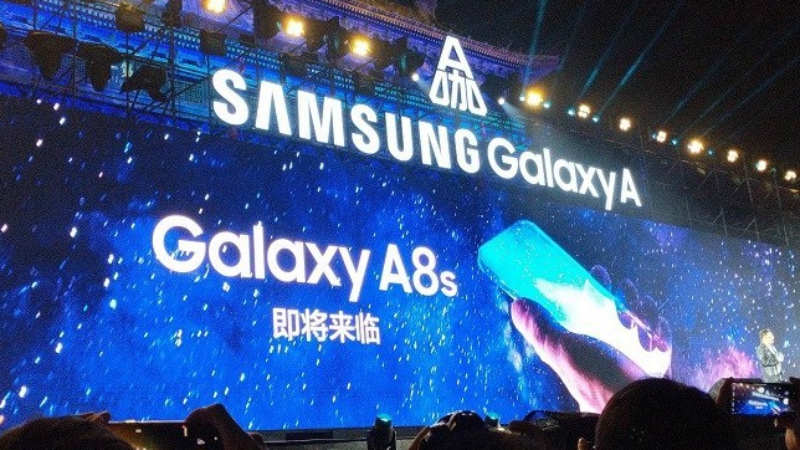 After bringing triple and quad camera smartphones, Samsung is now apparently set to show its innovation on the display side and bring the Galaxy A8s with a hole at the front, instead of a traditional notch. The South Korean giant teased the arrival of the Galaxy A8s at the launch of the Galaxy A9s and Galaxy A6s in China on Wednesday. The hole on the new smartphone is likely to have the room for the frontal camera as well as include an ambient light and proximity sensors. It could help the company offer a truly edge-to-edge display experience sans any notch design that has become quite common on several popular Android smartphones since the arrival of the iPhone X in September last year.

As per the teaser showcased at the launch event, courtesy ITHome, the Samsung Galaxy A8s will be the first in its kind smartphone with an ultra-thin bezel display. The company didn't reveal any details around the hardware, though it reportedly mentioned that the new model will come with a "first-time adoption" technology. Nevertheless, if we look at some of the early renders, as posted by SamMobile, the smartphone could have a hole instead of a display notch to have the front-facing camera and other sensors. It is believed that the hole will be drilled into the display to accommodate the required sensors. This isn't likely to be something similar to what we have seen on the existing Android smartphones as most of them have a rectangular display notch. In the recent past, some smartphone vendors including Oppo and Vivo recently moved to the waterdrop-style display notch that occupies lesser space than the traditional notch.

The camera hole on the Galaxy A8s will help Samsung deliver almost a full-screen experience. However, it will be interesting to see that how apps and interface would work in tandem with the hole.

The trend of innovation has been continued with the Galaxy A9s that also has a quad rear camera setup and features a 6.3-inch full-HD+ Super AMOLED display. The company at its China event also brought the Galaxy A6s as its first ODM phone that has been built by a third-party manufacturer.