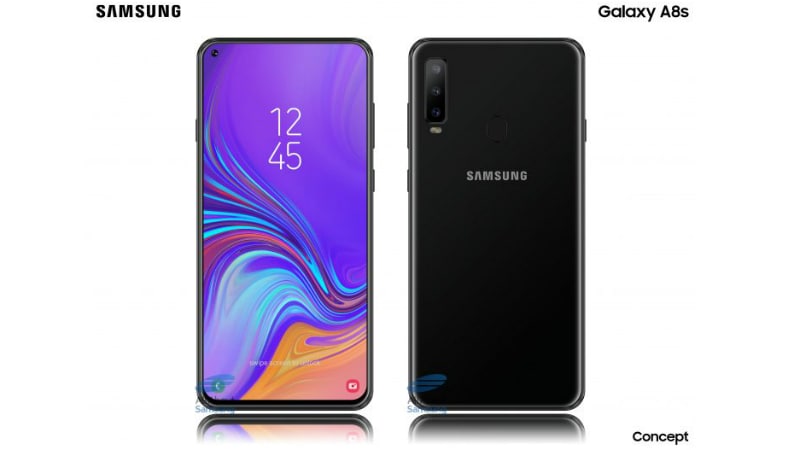 Samsung is expected to launch its Galaxy A8s smartphone in the next few days, which will most likely be its first one to sport the Infinity-O Display design bringing a small circular cutout for the selfie camera. The design of the upcoming Galaxy A8s has now been leaked in certain renders showing the presence of a triple rear camera setup and a rear-mounted physical fingerprint sensor. Additionally, some shots of the new Infinity-O Display panels have surfaced online that give us a real-world look at the cutout of the selfie camera on the panel.

Teased at the launch of the Samsung Galaxy A6s and Galaxy A9s, the Galaxy A8s will be launched by the South Korean giant shortly. The hole on the front is expected to house the selfie camera as well as crucial sensors like the proximity sensor and ambient light sensor. According to a report by German blog AllAboutSamsung, the upcoming Galaxy A8s will sport an almost-bezel-free panel with a slight chin at the bottom, not larger than the one on the Galaxy S9 or the Galaxy Note 9.

The hole for the selfie camera on the Samsung Galaxy A8s will be placed on the upper left corner of the display. However, the report mentions that the front camera is not placed under the display and will be visible. The leaked renders show a triple camera setup at the back, much like the Galaxy A7 (2018), with no information the sensors being used. The fingerprint sensor on the back of the smartphone, as shown in the renders, appears to be small and elliptical-shaped. That said, these renders are not officially from Samsung and their genuineness needs to be taken with a pinch of salt.

Separately, a couple of shots of the alleged Samsung Infinity-O Design screen panel have surfaced online, via SlashLeaks. While most of the elements are pixelated, the cutout for the selfie camera can be clearly seen placed on the upper left corner.