Samsung Galaxy A71 5G will reportedly be powered by Exynos 980 SoC. 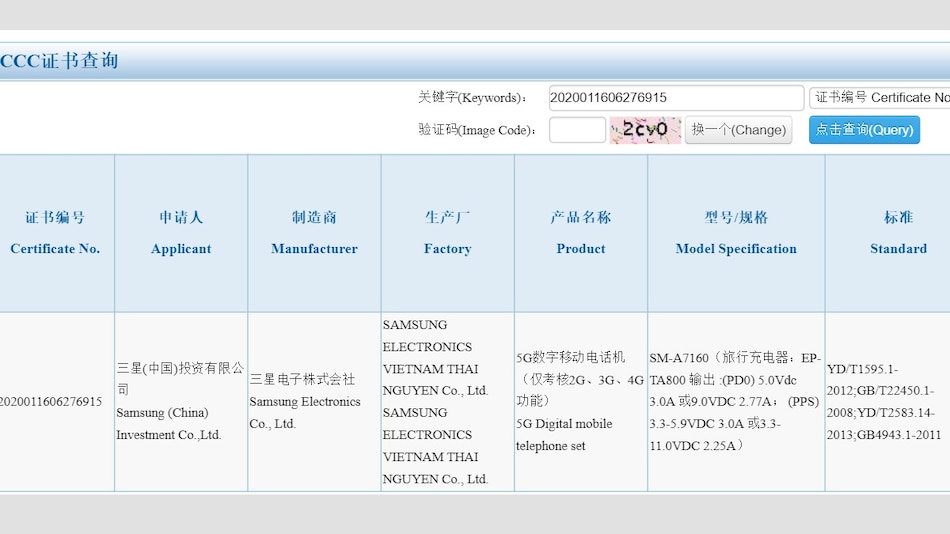 Samsung Galaxy A71 5G was recently spotted on Geekbench as well.

Samsung is apparently planning to launch a 5G-ready version of the Galaxy A71 phone, which was unveiled a few months ago. After being spotted on Geekbench, Samsung Galaxy A71 5G has now received the mandatory 3C certification in China. The 3C database lists the model number as SM-A7160 and also mentions support for 25W fast charging, a figure that is identical to what the 4G-only Galaxy A71 offers in terms of charging output. However, it is unclear when the Galaxy A71 5G will go official and what markets it will be available in.

The 3C listing of a phone with model number SM-A7160 - thought to be the Galaxy A71 5G - mentions support for 5G, as well as 4G, 3G, and 2G connectivity standards. Talking about the charging output, the Galaxy A71 5G is rated to support 5V/3A, 9V/2.77A, and 11V/2.25A, which roughly translates to 25W charging output. To recall, the 4G-compatible Galaxy A71 also offers support for 25W fast charging. As per the Geekbench listing of a Samsung phone with an identical model number, the Galaxy A71 5G will be powered by the in-house Exynos 980 SoC paired with 8GB of RAM and will run Android 10 on the software side.

To recall, Samsung launched the octa-core Exynos 980 SoC with 5G support back in September last year. It also has support for 4K video capture at 120fps and a 108-megapixel camera sensor. Interestingly, Samsung is yet to launch a phone powered by its in-house 980 SoC, but has supplied the same to other smartphone makers. Take for example Vivo, which launched the X30 and X30 Pro phones with the Exynos 980 SoC back in December. It appears that Samsung will substitute the Snapdragon 730G SoC powering the 4G-only Galaxy A71 with the Exynos 980 SoC inside the Galaxy A51 5G upon its debut.

Are You Digitally Literate? Here's What the Government Thinks
Honeywell Unveils Plan to Launch 'World's Most Powerful Quantum Computer'