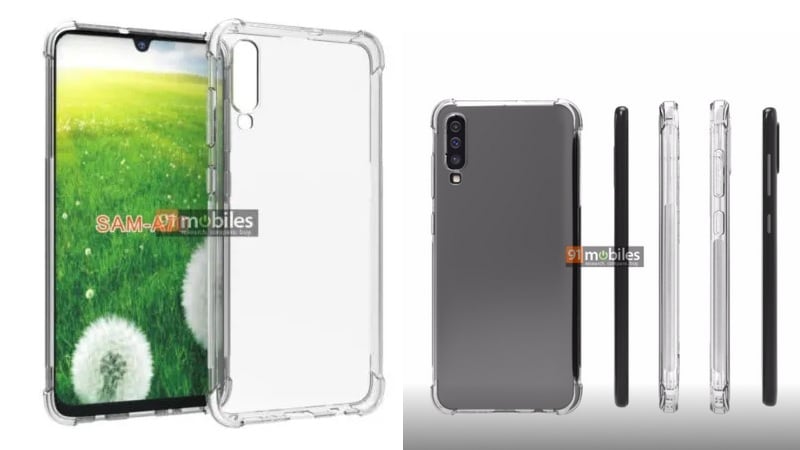 Samsung launched a trio of Galaxy A-series smartphones this year, and it looks like the company is gearing up to expand the portfolio by adding two new devices to the series – the Galaxy A70 and Galaxy A60. Alleged case renders of the Galaxy A70 have surfaced online and they indicate that Samsung's upcoming smartphone will pack triple rear cameras and will come equipped with an in-display fingerprint sensor. Additionally, another Samsung smartphone claimed to be the Galaxy A60 has allegedly received Bluetooth SIG certification, suggesting that an official launch is imminent.

Starting with the Samsung Galaxy A70, the alleged case renders of the upcoming smartphone indicate that it will pack triple rear cameras, just like the Galaxy A50 (Review). The leaked case renders claim to show the Galaxy A50 packing triple rears arranged vertically, while the LED flash is located below the rear camera module. What is interesting to note here is that the case renders lack the cut out for a rear-mounted fingerprint sensor, which means Samsung might equip the Galaxy A70 with an in-display fingerprint sensor.

As per a previous leak, the Galaxy A60 will reportedly feature a 6.7-inch full-HD+ Infinity-U display that might well be an LCD panel. It will be powered by the Snapdragon 6150 SoC paired with up to 8GB of RAM and 128GB of internal storage. Among the nine Galaxy A-series smartphones that will reportedly be launched in the first half of 2018, the Galaxy A60 is tipped to sport a triple rear camera setup consisting of a 32-megapixel primary sensor, while the other two will be a 5-megapixel and an 8-megapixel unit respectively. A 32-megapixel sensor will reportedly be there to handle selfies, while a 4,500mAh battery will keep the lights on.