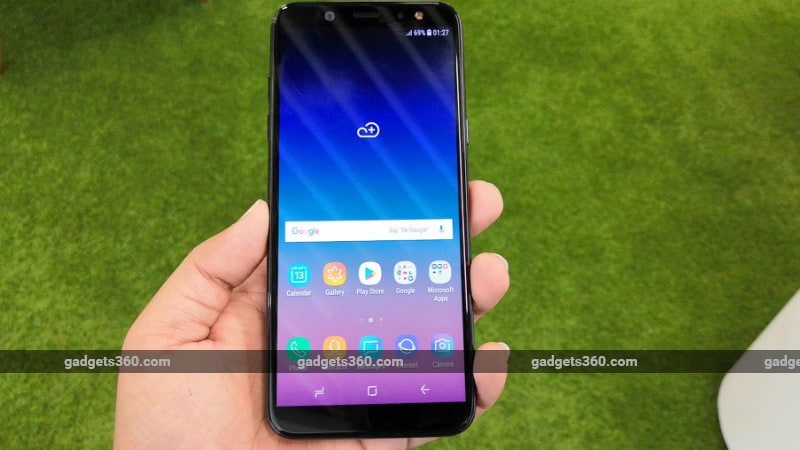 Samsung launched the Galaxy A6 and Galaxy A6+ just a month ago, and the 32GB storage variant has already received a price drop, according to an established retailer. The Samsung Galaxy A6 runs on Android Oreo out-of-the-box and sports an Infinity Display Super AMOLED display panel. It also sports a metal unibody design and is available in three colour options, including Blue, Black, and Gold. Additionally, the Galaxy A6 has artificial intelligence (AI)-powered camera features as well. The smartphone has received a Rs. 2,000 price drop, and is now priced a Rs. 19,990. The 64GB variant, which is not yet available in the country, will reportedly also get the same price cut.

The Samsung Galaxy A6 was launched in May and its price in India was set at Rs. 21,990 for the 32GB onboard storage variant, while its 64GB onboard storage variant comes with a price tag of Rs. 22,990. Mumbai-based retailer Mahesh Telecom report that the Samsung Galaxy A6 32GB variant is now priced at Rs. 19,990. Mahesh Telecom added that the 64GB storage variant, which is not yet available to buy in the country, will also be launched at Rs. 20,990, representing the same Rs. 2,000 price cut

Notably, Amazon India is also selling the Galaxy A6 at the reduced price - it is unclear if the reduced price on Amazon is due to a limited period discount. Prices on the Samsung eShop and Paytm Mall still reflect the old prices. We've contacted Samsung for confirmation of the price drop in India, and will update this space when we hear back.

While Samsung is known for dropping its prices eventually, dropping them so soon is certainly unusual. In any case, if you're looking to buy the Galaxy A6, you can get a Rs. 3,000 cashback via Paytm Mall and on purchases made using ICICI credit cards. The smartphone is available only via Paytm Mall, Samsung India E-Store, and Amazon India online and via Samsung retail stores offline.

The dual-SIM (Nano) Samsung Galaxy A6 runs Android 8.0 Oreo with Samsung Experience on top and features a 5.6-inch HD+ (720x1480 pixels) Super AMOLED panel with Samsung's Infinity Display design and 18.5:9 an aspect ratio. Under the hood, there is a 1.6GHz octa-core Exynos 7 series SoC, coupled with 4GB RAM. The smartphone has a 16-megapixel rear camera sensor with an f/1.7 aperture, while the front side has a 16-megapixel sensor with an f/1.9 aperture. Both cameras come with an LED flash. Also, there is a new default camera app that has features such as Live Bokeh and Background Blur Shape.

Samsung has provided 32GB and 64GB onboard storage options on the Galaxy A6 that both are expandable via microSD card (up to 256GB). The smartphone has 4G VoLTE, Wi-Fi, Bluetooth, GPS/ A-GPS, Micro-USB, and a 3.5mm headphone jack on the connectivity front and sports a rear-facing fingerprint sensor. Besides, it packs a 3000mAh battery.