Samsung Galaxy A51 is tipped to arrive next year packing 4GB of RAM. 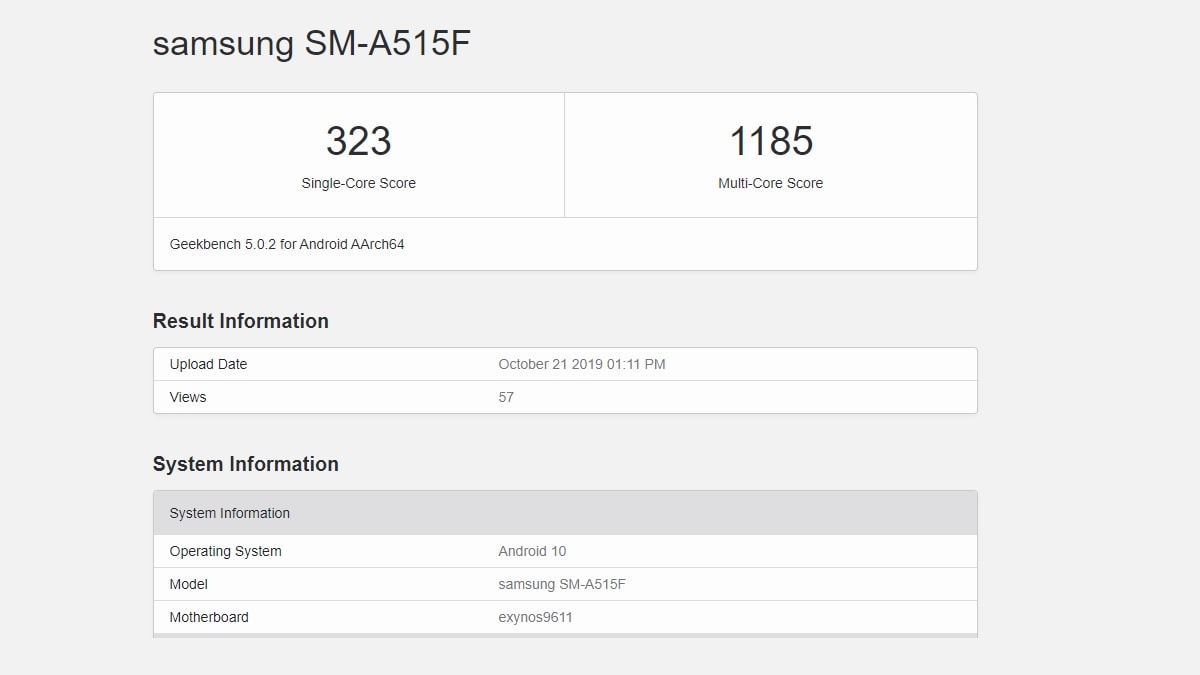 Samsung Galaxy A51 was spotted on Geekbench carrying the model no. SM-A515F

Samsung has launched a tonne of Galaxy A-series phones this year, and the company has even managed to unveil mid-cycle upgrades with minor improvements for some of the phones. Samsung is now believed to be preparing successors for its 2019 Galaxy A-series portfolio next year, starting with the Galaxy A51. An unannounced Samsung phone, alleged to be the Galaxy A51, has been spotted on Geekbench running Android 10. The Galaxy A51's Geekbench visit has also revealed some of the phone's key specifications such as the processor powering it and the amount of RAM that ticks alongside.

The Geekbench listing carries the model number as SM-A515F. The listing suggests that the Galaxy A51 will be powered by Samsung's in-house Exynos 9611 SoC that also ticks at the heart of Galaxy A50s and the Galaxy M30s. As far as the benchmark scores go, the Galaxy A51 achieved 323 in the Geekbench single-core test and put up a tally of 1185 in the multi-core test.

The octa-core Exynos 9611 SoC powering the Samsung Galaxy A51 was accompanied by 4GB of RAM as per the Geekbench database. However, Samsung might also launch other variants of the phone with a higher amount of RAM. It is worth noting that the Samsung Galaxy A51 was spotted running Android 10 that suggests the phone will run the new One UI 2.0 on the software side upon its launch.

If the previous leaks are anything to go by, the Samsung Galaxy A51 will come with a quad rear camera setup that will be headlined by a 32-megapixel camera. The main snapper will be assisted by a 12-megapixel wide-angle camera, a 12-megapixel telephoto camera with 2x optical zoom support, and a 5-megapixel depth sensor. As per a previous report, the Galaxy A51 will employ the Exynos 9630 processor, but the Geekbench listing says otherwise.