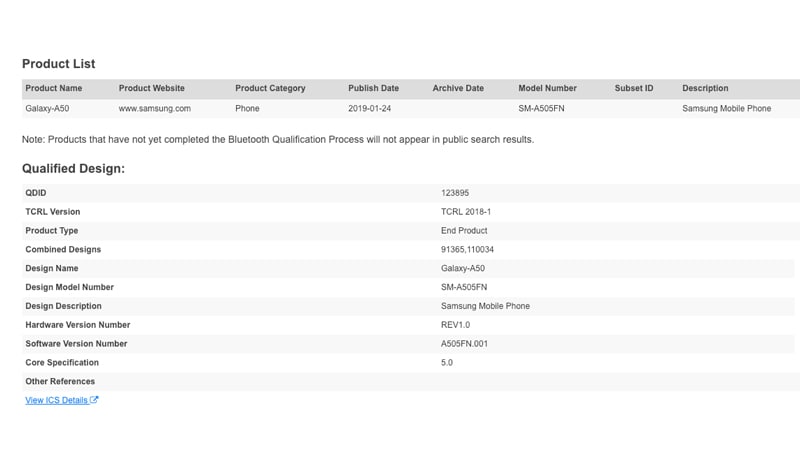 There have been multiple rumours of Samsung working on new Galaxy A-Series smartphones. One fresh rumour is about the Samsung Galaxy A5 (2019) allegedly being called the Galaxy A50, something that's in line with earlier reports about Samsung adopting a double digit naming scheme this year. The source of this leak is a Bluetooth SIG listing of the upcoming smartphone. The alleged Samsung Galaxy A50 has received a Bluetooth 5.0 certification which pretty much confirms that the upcoming device will support this Bluetooth standard. Listed on the website as SM-A505FN, it matches the naming scheme Samsung has used for its previous Galaxy A5 smartphones.

Apart from this listing there have been quite a few leaks which reveal more specifications of the alleged Samsung Galaxy A50. The new smartphone is alleged to sport an Infinity-V display making it the first Galaxy A-Series smartphone to do so. It is also rumoured to sport an OLED panel with an in-display fingerprint scanner similar to the ones seen on the Huawei Mate 20 Pro and the OnePlus 6T.

A report suggests that the Galaxy A50 will have a triple camera setup similar to the one seen on the Samsung Galaxy A7 2018. Which could mean a 24-megapixel main camera accompanied by a wide-angle camera and a depth sensor.

In terms of software, the alleged Samsung Galaxy A50 is said to run the latest Android 9 Pie out-of-the-box. As previous reports had pointed out, the alleged Galaxy A50 will launch at MWC 2019 but after the launch on the flagship Samsung Galaxy S10 series devices. Price and device availability is unknown at the moment.

Vodafone 'Pauses' Huawei Deployment in Its Core Network
Samsung Galaxy S9+, Galaxy S8, Galaxy On8, and Others on Discounts in 'Samsung Days' Sale on Flipkart