Samsung Galaxy A50 Certified by US FCC, Galaxy A20 Spotted on Geekbench with Entry-Level Specs 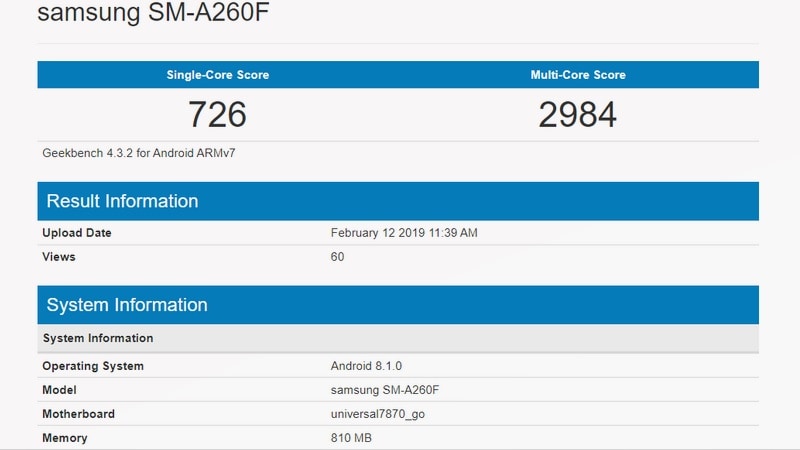 The Galaxy A20 was spotted running Android 8.1 Oreo on Geekbench

Starting with the Samsung Galaxy A20 (model no. SM-A260F), its Geekbench listing states that the smartphone will pack a modest 1GB of RAM and will be powered by the octa-core Exynos 7870 SoC clocked at 1.59 GHz. The smartphone was spotted running Android 8.1.0 Oreo, however, the ‘universal7870_go' name listed against the motherboard tag on benchmarking platform's database indicates that the Samsung Galaxy A20 will run Android Oreo Go Edition. The device in question is among the four Galaxy A-series smartphones Samsung is expected to launch in India in the first half of 2019. The Galaxy A50 will reportedly come equipped with an AMOLED panel and will draw power from a 4,000mAh battery. The Samsung Galaxy A20's Geekbench listing was spotted by Nashville Chatter.

The Samsung Galaxy A50, on the other hand, has been leaked multiple times in the past and has now received the mandatory US FCC, suggesting that the smartphone's launch is not that far away. The US FCC listing has revealed some details regarding the upcoming smartphone such as support for dual-SIM functionality, Bluetooth 5.0, dual-band Wi-Fi and 4G VoLTE. The smartphone's listing indicates two variants (SM-A505F/DS and SM-A505F) that might be the single and dual-SIM variants of the Samsung Galaxy A20, while the display diagonal is mentioned at 158mm. Factoring in the listed dimensions of the entire body (158.5x74.5 mm), it appears that the Samsung Galaxy A50 might pack a 6.22-inch display. The upcoming smartphone's US FCC listing was spotted by SamMobile.

A recent leak claiming to show the internal design of the smartphone tipped that the Samsung Galaxy A50 will feature a triple rear camera setup, alongside a USB Type-C port and3.5mm headphone jack. The Samsung Galaxy A50 is also rumoured to sport a 24-megapixel camera and will reportedly come equipped with a 4,000mAh battery. The smartphone was recently spotted on the Bluetooth SIG certification database and is expected to be launched in the first half of the ongoing year.

Other reports making rounds of the rumour mill claim that the Samsung Galaxy A50 will sport an AMOLED display with an Infinity-V design and will be powered by the Exynos 9610 octa-core SoC paired with 4GB of RAM and up to 128GB of internal storage. An in-display fingerprint sensor and a ToF (Time-of-Flight) sensor have also been tipped for the upcoming smartphone, but those are just rumours at the moment and there is a considerable amount of doubt regarding their veracity.