Samsung Galaxy A5, Galaxy A7 Successors Leaked in Images 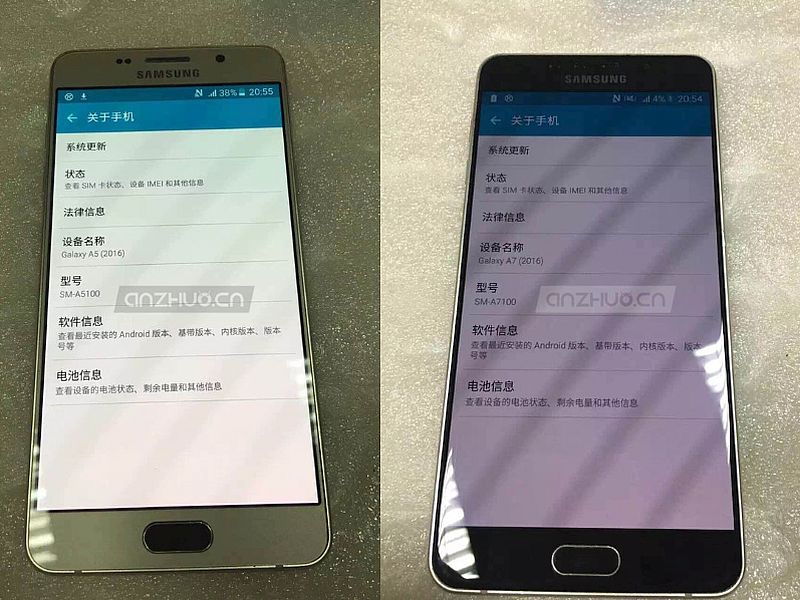 Samsung's first-generation Galaxy A-series smartphones - the Galaxy A3, Galaxy A5, and Galaxy A7 - were launched late last year. The handsets received great traction from consumers thanks to their metal bodies - the first smartphone with such a build from Samsung however was the Galaxy Alpha.

The speaker grille has been shifted from the back of the device to bottom panel, in-line with a previously leaked image. In one of the leaked images, both the handset's device settings page shows model name as Galaxy A5 (2016) and Galaxy A7 (2016), tipping that Samsung may launch the handsets only next year.

Based on preliminary leaks, the Samsung Galaxy A3 (2016) will feature a 4.7-inch HD (720x1280 pixels) display and will be powered by an Exynos 7580 quad-core processor clocked at 1.5GHz coupled with 1.5GB of RAM. Other specifications include 16GB inbuilt storage; a 13-megapixel rear camera, and a 5-megapixel front camera.

The Galaxy A5 (2016), on the other hand, was separately leaked to run Android 5.1.1 Lollipop and feature a 5.2-inch full-HD display. It is said to come with an octa-core Samsung Exynos 7 processor clocked at 1.6GHz, clubbed with ARM Mali-T720 and 2GB RAM. Other innards include 16GB of inbuilt storage; a 12-megapixel rear camera with LED flash, and a 4.7-megapixel front-facing camera.