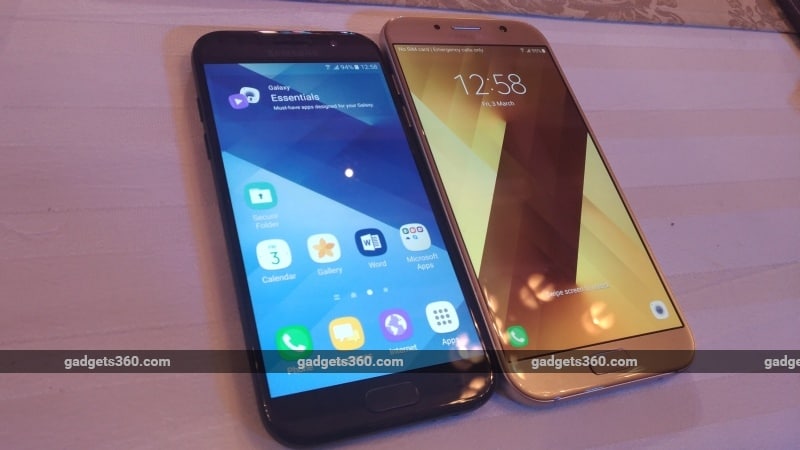 The Samsung Galaxy A5 (2017), Galaxy A7 (2017) are set to go on sale in India from Wednesday. To recall, the South Korean consumer electronics giant had launched the smartphones in the country in the first week of March, and at that time had specified a March 15 availability date. The smartphones will be available to buy via the Samsung India E-Store as well as offline retailers in Black Sky and Gold Sand colour variants.

The company has priced the Samsung Galaxy A5 (2017) at Rs. 28,990, while the Samsung Galaxy A7 (2017) has been priced at Rs. 33,490. The highlights of Galaxy A5 (2017) and the Galaxy A7 (2017) smartphones are their Galaxy S7-style design, their "enhanced" cameras (compared to their predecessors) with low-light optimisation, a simplified camera UX with a Food Mode, as well as their IP68-rating for dust and water resistance, which Samsung claims is a first for the price segment.

As for the common specifications and features - the Galaxy A5 (2017) and the Galaxy A7 (2017) smartphones both come with 32GB of inbuilt storage that's expandable via microSD card (up to 256GB), a fingerprint scanner (placed on the home button), an Always on Display, a USB Type-C port coupled with a 3.5mm audio jack, Samsung Pay support, as well as the presence of features like Samsung Cloud and Secure Folder.

Both offer 4G (LTE Cat. 6) and VoLTE support, Wi-Fi 802.11ac, Bluetooth v4.2, and NFC. Both the Galaxy A5 (2017) and the Galaxy A7 (2017) also feature the same sensors - an accelerometer, ambient light sensor, barometer, magnetometer, and proximity sensor. Both smartphones are powered by a 1.9GHz octa-core SoC coupled with 3GB of RAM, and both sport a 16-megapixel rear camera with LED flash and an f/1.9 aperture, as well as a 16-megapixel front camera with an f/1.9 aperture.