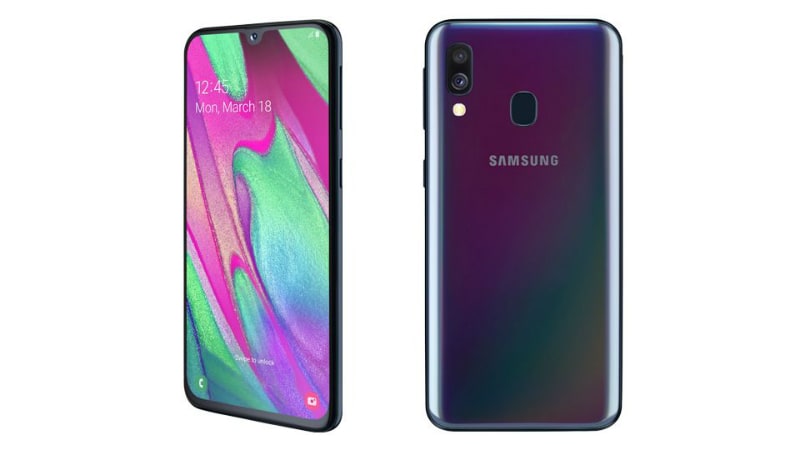 Samsung Galaxy A40 has been launched in the Netherlands. The new Galaxy A-series model, which was initially a part of rumours and leaks, is available for pre-orders on Dutch online store Belsimpel.nl. However, the phone is expected to launch globally on April 10. Highlights of the Galaxy A40 include its 'Infinity-U Display' panel, dual rear camera setup, 25-megapixel selfie camera setup, and One UI based on Android Pie. The Galaxy A40 also comes in a range of colour options, including Black, Blue, Coral, and White.

The Samsung Galaxy A40 price in the Netherlands has been set at EUR 249 (roughly Rs. 19,500). The phone is currently available for pre-orders on Belsimpel.nl.

Samsung is notably hosting an event on April 10 where it is expected to launch the Galaxy A40. The event will take place in Bangkok, Milan, and Sao Paulo, though it will be live streamed for the global audience.

As per the listing on Belsimpel.nl, the dual-SIM (Nano) Samsung Galaxy A40 runs Android 9.0 Pie with One UI on top and features a 5.9-inch full-HD+ (1080x2280 pixels) Super AMOLED Infinity-U Display. The display panel has a 19:9 aspect ratio. The phone is also powered by an octa-core Samsung Exynos 7885 SoC, paired with 4GB of RAM.

For photos and videos, the Samsung Galaxy A40 has a dual rear camera setup that includes a 16-megapixel primary sensor along with an f/2.0 lens. There is also a 25-megapixel sensor at the front for selfies and video chat support.

The Galaxy A40 comes with 64GB of onboard storage that is expandable via microSD card. Connectivity options include 4G LTE, Wi-Fi, Bluetooth v4.2, GPS/ A-GPS, NFC, USB Type-C, and a 3.5mm headphone jack. The phone also has an array of sensors that comprises an accelerometer, ambient light sensor, fingerprint sensor (at the back), gyroscope, and magnetometer. Besides, it packs a 3,100mAh battery and measures 144.3x69.1x7.9mm.