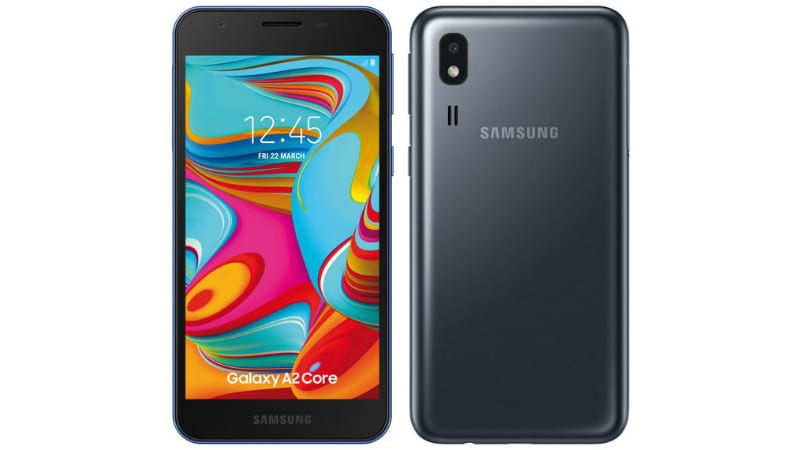 Samsung Galaxy A2 Core detailed specifications have surfaced online just days after its renders got leaked. The new phone, which is likely to be based on Google's Android Go platform, is found to have a 5-inch display and an Exynos 7870 SoC. In another development, an official user manual pertaining to the Galaxy A2 Core has also been published online. The user manual shows that the entry-level Galaxy A-series model comes with a dedicated microSD card slot. The Galaxy A2 Core also appears to have a Micro-USB port.

In terms of optics, the listing on Slashleaks shows a 5-megapixel camera sensor at the back along with an f/1.9. Details about the selfie camera aren't available yet.

Importantly, what makes the Galaxy A2 Core an Android Go phone is the presence of Android 8.1 Oreo (Go edition) that has also been featured on the leaked specifications list.

The Samsung Galaxy A2 Core appears to have large-enough bezels on the top and bottom of its display panel and a simple back panel with the camera setup featured at the top-left corner. The user manual also mentions Android 8.1 Oreo (Go edition) along with preloaded lightweight apps, including Google Assistant Go, Google Go, and Maps Go.

Samsung has provided the user manual of the models SM-A260F, SM-A260F/DS, and SM-A260G/DS that all are likely to be the global variants of the Galaxy A2 Core with single-and dual-SIM support.

Samsung hasn't revealed the launch date of the Galaxy A2 Core. However, considering the arrival of its user manual and the rumours emerging on the Web, the new handset should be unveiled formally in the coming days.

To recall, Samsung brought the Galaxy J2 Core as its latest Android Go phone back in August last year. The handset runs on Android 8.1 Oreo (Go edition) and has a 5-inch qHD display. It is powered by a quad-core Exynos 7570 SoC along with 1GB of RAM and includes an 8-megapixel rear camera as well as a 5-megapixel front camera.