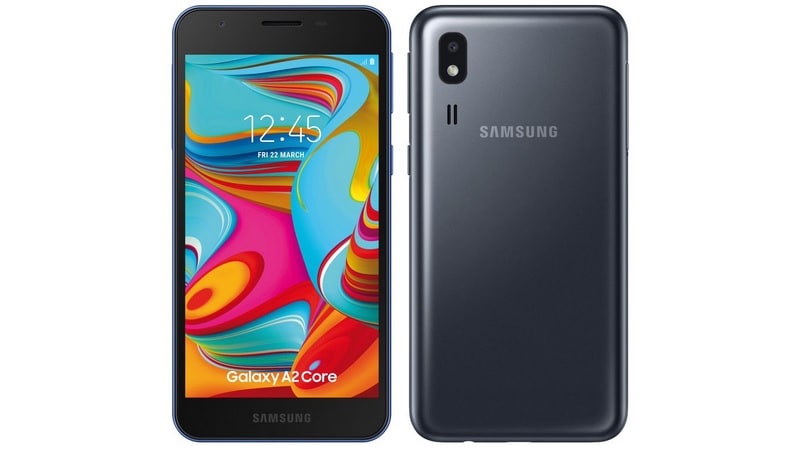 Samsung Galaxy A2 Core entry-level smartphone is priced at Rs. 5,290

Samsung Galaxy A2 Core has been launched in India. The new entry-level Samsung smartphone runs Android Pie (Go Edition) and appears to be the successor to Samsung Galaxy J2 Core that was launched back in August last year. As for the specifications, the Samsung Galaxy A2 Core packs a 5-inch qHD display and is powered by an Exynos SoC paired with a paltry 1GB of RAM. It bears a single 5-megapixel camera on the front as well as rear. Notably, the company has yet to make an official announcement about either the smartphone or its launch in India.

The Samsung Galaxy A2 Core price in India has been set at Rs. 5,290, Ranjivjit Singh, Chief Marketing Officer and Senior Vice President, Samsung India told IANS. It is now available from offline stores, according to established retailer Mahesh Telecom. There is no word from Samsung India regarding the smartphone's availability from online channels in the country. We have reached out to Samsung and will update the story with more information when we hear back.

As per the specifications mentioned on the Galaxy A2 Core marketing image shared by Mahesh Telecom, the entry-level Samsung offering will pack a 5-inch qHD (960x540 pixels) display, The affordable smartphone is powered the octa-core Exynos 7870 SoC paired with just 1GB of RAM and 16GB of internal storage. As mentioned above, the Samsung Galaxy A2 Core runs Android Pie (Go edition) and draws power from a 2,600mAh battery. In the imaging department, the Samsung Galaxy A2 Core comes equipped with a single 5-megapixel rear camera as well as a 5-megapixel front camera.

That's it for the specifications shared by Mahesh Telecom, however, more specifications were tipped earlier. As per an extensive leak which arrived last month, the Samsung Galaxy A2 Core's connectivity suite will include 4G LTE, Wi-Fi 802.11 b/g/n, Bluetooth v4.2, GPS/ A-GPS, FM radio, Micro-USB port, and a 3.5mm headphone jack. The dimensions of the Samsung Galaxy A2 Core are reportedly 141.6x71x9.1mm and it tips the scales at 142 grams. 8GB of inbuilt storage was also listed in the leak, expandable via microSD card (up to 256GB). We can expect Samsung to have brought forward this storage expandability to the 16GB inbuilt storage model launched that's reportedly been launched in India.

Since the device runs Android Pie (Go Edition), it will come pre-installed with a host of Android Go-optimised apps such as Google Assistant Go and Maps Go to name a few. As per another leak, the Samsung offering comes in Blue and Black colour options. Additionally, a leaked user manual revealed that the Samsung Galaxy A2 Core will be launched in both single-SIM and dual-SIM variants, but it is not clear which version has made it to the Indian market - though we can expect the dual-SIM variant to have made its way into the country based on past Samsung launches.