Samsung Galaxy A01 Core runs on Android (Go Edition) and is equipped with an 8-megapixel rear camera. 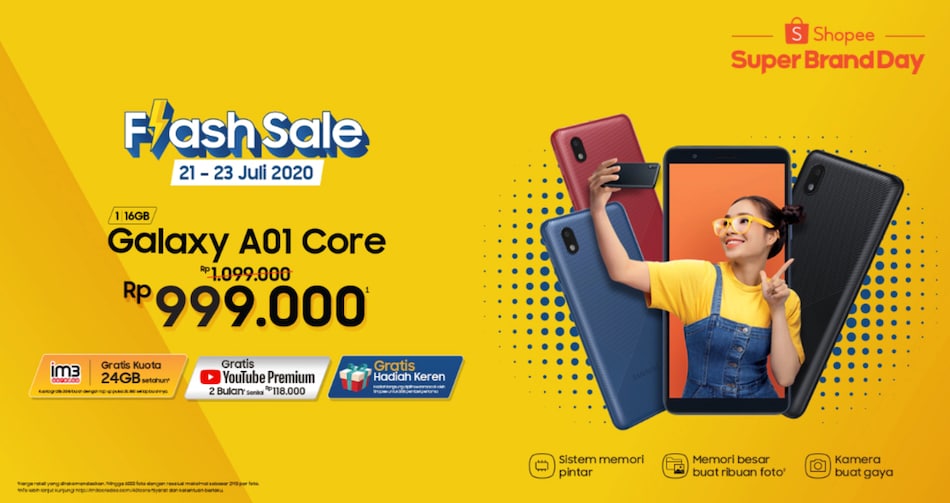 Samsung Galaxy A01 Core is powered by 1.5GHz quad-core SoC

Samsung Galaxy A01 Core has quietly launched in Indonesia as an entry-level Android Go edition offering. The phone packs 1GB of RAM, is powered by an unknown 1.5GHz quad-core SoC, and is offered in modest 16GB and 32GB internal storage options. The Samsung Galaxy A01 Core has traditional bezels on all sides of the display and a 5.3-inch LCD screen with HD+ resolution. There is an 8-megapixel rear camera with LED flash and a 5-megapixel selfie camera on board. The phone also packs a 3,000mAh battery inside.

The dual-SIM (Nano) Samsung Galaxy A01 Core runs Android Go edition. It features a 5.3-inch HD+ (720x1480 pixels) TFT LCD display and is powered by an unknown quad-core SoC clocked at 1.5GHz. It packs 1GB of RAM, up to 32GB of storage, and supports expansion of storage via dedicated microSD card support (up to 512GB).

There is a 3,000mAh battery inside the Samsung Galaxy A01 Core that is touted to offer up to 17 hours of 4G talk time, 14 hours of LTE or Wi-Fi Internet usage, 11 hours of video playback, and up to 70 hours of video playback. Connectivity options include Micro-USB port, Wi-Fi 802.11 b/g/n, Bluetooth v5, 3.5mm audio jack, GPS, GLONASS, and more. Sensors on board include accelerometer and proximity sensor. The dimensions of the phone measure at 141.7x67.5x8.6mm and the phone weighs 150 grams. *